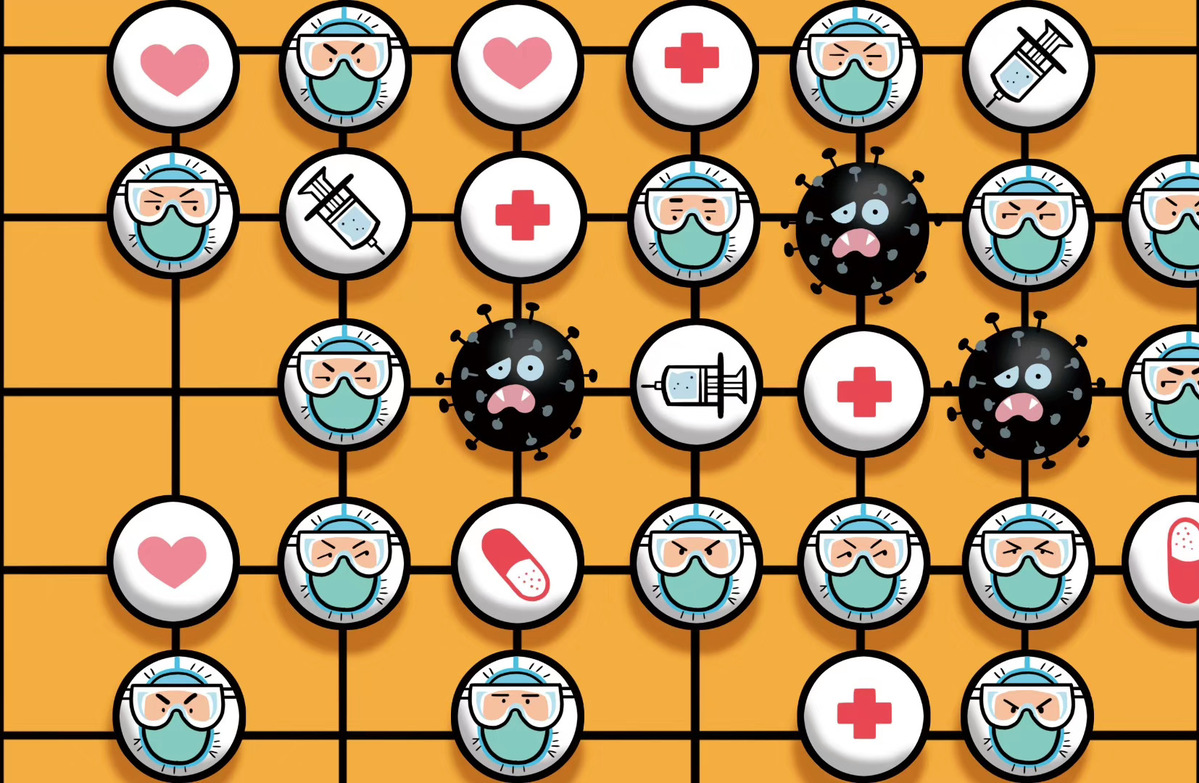 Here are some encouraging medical research developments achieved over the weekend related to the fight against the novel coronavirus.

Three existing drugs that showed promise in inhibiting the novel coronavirus in vitro have entered human trials in China, and early results have showed that some patients are seeing noticeable improvement, Zhang Xinmin, head of the China National Center for Biotechnology Development, said on Saturday.

The three drugs are anti-malaria drug chloroquine, anti-flu drug favipiravir, and experimental drug remdesivir, he said, adding they were selected from 100 others after demonstrating great promise when used in experiments on infected cells in a controlled lab environment.

Chloroquine is an established drug, meaning its safety has been thoroughly validated. The drug is being tested on over 100 patients in more than 10 hospitals in Beijing and Guangdong province, with a trial in Hunan province also in the pipeline. Early clinical results show chloroquine has some therapeutic effect against novel coronavirus pneumonia, Zhang said.

As for favipiravir, another widely used drug, a 70-patient clinical trial is taking place in Shenzhen, Guangdong province. The drug has been shown to be effective against the virus, with slight side effects.

A generic version of the drug－as its 20-year patent period ended in August－was approved by China's National Medical Products Administration on Saturday, according to the government of Taizhou, Zhejiang province. Hisun Pharmaceutical, a company based in the city, has begun manufacturing the drug.

Remdesivir is an experimental drug created by United States biotech company Gilead Sciences to combat Ebola. It is being tested in over 10 medical institutions in Wuhan, Hubei province, Zhang said. "We are looking forward to seeing the clinical results soon," he said.

China is testing different types of vaccines against the novel coronavirus, and some, including a recombinant protein vaccine, have entered animal trials, Zhang said.

He said the novel coronavirus is a new pathogen, and researching the vaccine and ensuring it is effective and safe will take time. Scientists had been working around the clock, and the progress made by Chinese research teams on vaccine development was on par with that of foreign peers.

Zhang said the types of vaccines Chinese scientists are testing include an inactivated vaccine, an mRNA vaccine, a recombinant vaccine, a DNA vaccine and others.

The vaccines all had their pros and cons, but safety was still the upmost priority, said Yan Jinghua, a researcher from the Chinese Academy of Sciences' Institute of Microbiology.

Yan said her team is working on a recombinant protein vaccine, which uses protein from the virus' surface to stimulate immune response in cells. The vaccine is in animal trials to test for potency against the virus and safety, she added.

According to the US Department of Health and Human Services, one of the biggest advantages of a recombinant vaccine is that it can be used on almost anyone, including those with weak immunity and underlying health issues, because the vaccine only uses a specific piece of the pathogen rather than a whole but weakened one, as in a live-attenuated vaccine.

Chinese scientists are using drugs used to treat rheumatism to quell cytokine storm, an overreaction of the immune system that is a major cause of death for critically ill patients infected with the novel coronavirus, Zhou Qi, director of the Chinese Academy of Sciences' Institute of Zoology, said on Saturday.

Cytokine storm is a potentially fatal medical condition in which the body's immune system goes into overdrive and produces an excess of immune cells that indiscriminately attack the invading pathogen and healthy cells.

The occurrence of cytokine storm is a telltale sign that a patient with moderate symptoms is worsening to severe or even critical condition, he said.

Chinese scientists are now finding ways to reduce the effects of cytokine storm and its harm to the body. One approach is to use drugs designed to treat rheumatism that can also suppress the overreaction of the immune system, Zhou said.

Some drugs have been put into clinical trial on 14 critical cases, with the oldest patient being 82 years old.

"The results from these cases are encouraging," he said, adding that many comparative experiments are in the works to further test the method's potency.

"If the initial results prove effective, we will promote these treatments to critical patients as soon as possible on compassionate grounds," he said. "The work on reducing cytokine storm is still ongoing. I believe more candidate drugs will be put into treatment."

Chinese scientists have created a new diagnostic method using blood serum that can produce accurate results in 15 minutes and greatly reduce the exposure of medical workers to ill patients.

The new test kit is called novel coronavirus IgM antibody, and it has finished preliminary evaluation in lab and clinical tests, the State Key Laboratory of Respiratory Disease in Guangdong province said.

The sample lab kit has been issued to Wuhan, Huanggang, Daye and other cities in Hubei province to complement the current method of testing for the nucleic acid of the virus.

That commonly used diagnostic method requires doctors to take viral samples from the patient's throat or nostrils. While convenient, it produces less accurate results than the more time-consuming method of sampling from the lung, where there is a higher density of coronavirus.

Moreover, given how the virus is primarily spread through respiratory droplets produced when sneezing or coughing, medical personnel collecting the samples are directly exposed to the patients and at risk of catching the virus.

The new serum method eliminates this issue because doctors can analyze collected blood samples from the safety of their labs. It can also detect the virus even if the blood sample has been diluted 500 to 1,000 times, meaning it is highly sensitive and less likely to produce false negative results.