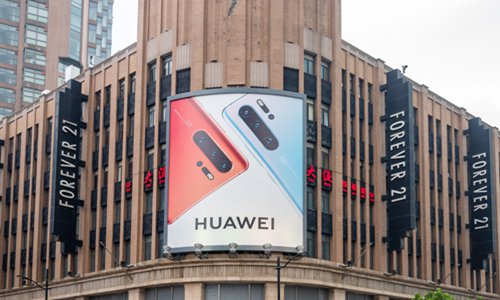 A Huawei advertisement in Shanghai in August. (Photo: IC)

A reported roadblock that Huawei may face for its next flagship smartphone due to US government's blacklisting will instead help drive the Chinese company to further develop its own software ecosystem, which will enable it to gain a leading role in the industry, insiders said.
Huawei is scheduled to launch its new Mate 30 line on September 19 in Munich, Germany, Richard Yu Chengdong, chief executive of Huawei's consumer business group, announced on his Weibo account.
It will be Huawei's first major flagship smartphone launch since the Trump administration's ban was imposed in May.
The Mate 30 line will support 5G networks and contain the Kirin 990 chipset, which will be unveiled on Friday at the IFA consumer technology fair in Berlin, according to media reports.
Most netizens expressed excitement at Yu's Weibo post. "Finally, it's coming! Can I get one by express delivery?" a netizen named Huaimengyin said.
Some expressed concern about what kind of operating system the new phone will carry. "Will it also be Android?" Yangzheng said.
"I wonder how Huawei can respond to Google's ban. If so, I don't know which should I give up - Gmail or a Huawei smartphone," a foreign student in the UK who only gave his name as Dylan told the Global Times.
Although the device would "bring infinite possibility," according to what Yu described, Reuters reported recently that the Mate 30 cannot be sold with licensed Google apps and services due to the US blacklisting Huawei.
The US government on August 19 announced a temporary reprieve, but that move did not apply to new products like the Mate 30, Reuters said, citing a Google spokesman.
Google and Huawei declined to comment when reached by the Global Times on Monday.
If the new phone can't be shipped with Google's apps and services on board, the Huawei product may enjoy lower popularity than before, because some Google apps like Gmail are considered essential by many foreign users, Sun Yanbiao, head of Shenzhen-based research firm N1mobile, told the Global Times on Monday.
Zhang Yi, CEO with Shenzhen-based iiMedia Research, agreed that Huawei may face such pressure, but "as Huawei plans to unveil such a vital product in an overseas market, it has made sufficient preparations to ensure the smooth operation of the product," he said.
"It may have a backup plan, which is what Huawei has long done as it was forced to do so under the pressure of the US ban," Zhang told the Global Times on Monday.
The US blacklist actually helped drive Huawei to develop its own software. The company launched its HarmonyOS on August 9 and has been devoted to advancing its Harmony ecosystem.
Given Huawei's competence, the company can make its OS and ecosystem into the mainstream, Zhang said, noting that if Huawei was cornered by the US and started its software or ecosystem backup plan, Google would face big challenges.
Although Google's apps and services have captured large shares in many foreign markets, Huawei does better in support for software, research and development ability and its competence to connect industrial chains, according to experts.
Sun said the decision to release the Mate 30 at this time in Germany showed that Huawei can still get some leeway from Google and the US government.
American companies can seek a license to exempt certain products from the ban. Google would not say whether it had applied for a license to offer its apps and services, Reuters said. Google once said that it wants to continue supplying Huawei.
The US government faces much pressure from complaints filed by American companies that are suppliers of Huawei as the ban forbids them from doing business with the Chinese technology giant, according to Sun.