Govt has room to 'mitigate shocks' 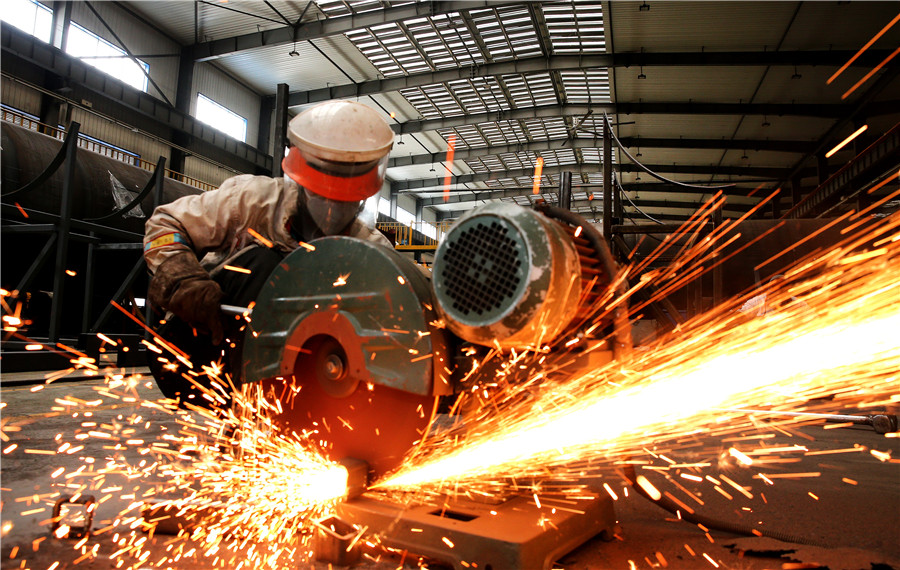 A technician works on the production line of an energy equipment manufacturer in Nantong, Jiangsu province. (Photo by Xu Congjun/for China Daily)

China could use more fiscal stimulus and allow for greater foreign exchange flexibility to minimize the negative impact on its economy if trade tension with the United States further escalates, the International Monetary Fund said on Thursday.

"The government has room to mitigate the shocks from external uncertainties and trade tensions by using fiscal policy," Alfred Schipke, the IMF's senior resident representative for China, said at a media briefing in Beijing.

The IMF predicted that there could be fiscal expansion of about 0.8 percentage point of China's GDP if the trade dispute with the US further escalates with Washington raising tariffs to 25 percent on remaining imports from China.

Schipke said that the fiscal stimulus could be used to boost domestic consumption by introducing more tax reforms and adopting supportive policies for low-income households.

China has rolled out 20 measures to stimulate consumer spending such as relaxing car-buying restrictions, encouraging the purchase of new energy vehicles and expanding cross-border e-commerce imports to more cities.

On the monetary side, the IMF believes that policy easing could be constrained by the country's rapid credit growth and build-up of debt in both the private and public sectors.

"The debt level constrains space for significant monetary easing because it would mean further build-up of debt and it could create significant vulnerability," Schipke said.

The IMF also noted that heightened external tensions have put the renminbi's exchange rate under pressure, but China's foreign reserve remains adequate with no indication of large scale of foreign exchange intervention by the monetary authority. The value of renminbi is assessed to be in line with economic fundamentals, the IMF said.

Schipke said that China could allow greater flexibility in foreign exchange rate to respond to rising trade tension. The renminbi's exchange rate may further depreciate in the adverse situation of escalating trade conflicts with the US, he added.

The IMF suggested that China should continue with the deleveraging and de-risking process to strengthen the country's financial system and address risks in weak banks.

Zhang Longmei, the IMF's deputy resident representative for China, said that China needs to continue to improve credit allocation as financial regulatory tightening has led to a contraction of credit supply, especially in the shadow banking sector, which has affected lending to private and smaller firms.

She added that China should continue to boost productivity by accelerating the opening of the nonstrategic sectors and intensifying the reforms of State-owned enterprises.

Economists at Standard Charter said in a research note that China's pro-growth measures appear to be taking effect as the economy has shown signs of stabilization.

"We see tax cuts for manufacturers and the central bank's renewed guidance to increase lending to the manufacturing sector, privately owned enterprises and SMEs helping to partly offset headwinds from falling industrial profits and US-China trade uncertainty in the second half of the year," they said in the research note.