Macao aims to play a more active role in the integration of the Guangdong-Hong Kong-Macao Greater Bay Area and explore markets along the routes of the China-proposed Belt and Road Initiative (BRI) to diversify its economy and reduce its reliance on the gambling industry. Close ties with the Chinese mainland will be the only way for Macao to counter external pressure, local business representatives and officials told the Global Times in interviews. 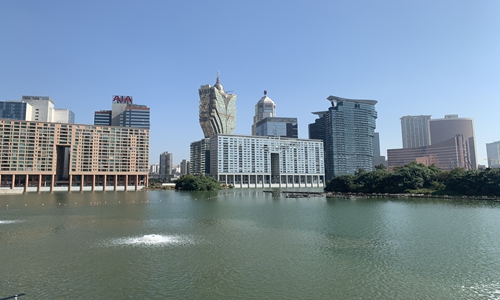 Located in southern China, the Macao Special Administrative Region (SAR) has been developing under the "one country, two systems" principle while enjoying a high degree of economic freedom. However, its economy is vulnerable to headwinds created by US' tariff war and its own heavy dependence on the casino industry.

Particularly when gambling revenues have continued falling due to sluggish economic growth and lingering external uncertainties, local businesses said they feel the urgency of diversifying the economy away from the gambling sector.

Although Macao is an international city, its level of internationalization is much lower than that of Hong Kong. Macao's promising future is guaranteed by deepening ties with the mainland, Lao Ngai Leong, vice chairman of the All-China Federation of Returned Overseas Chinese, told the Global Times.

"My confidence for implementing the 'one country, two systems' principle has never been shaken, and Macao has seen rapid growth in recent decades thanks to the support of the central government," Lao said.

However, due to its limited market size and resources, Macao has to further integrate into the Greater Bay Area to diversify its industries, as the dominant position of casinos accounts for about 80 percent of its GDP.

The IMF has estimated that the city's economy will contract by 1.3 percent in 2019 and 1.1 percent in 2020, before returning to growth in 2024, according to media reports.

Macao is still facing obstacles in economic diversification, which will remain a major task for local authorities. But the city could use its advantages in terms of high autonomy and free markets, which would offer it a way out of recession, Edmund Ho Hau-wah, the first chief executive of the Macao SAR government, said during a recent group interview.

The global casino hub has already made progress in reducing reliance on the gambling sector. As of the end of 2017, the total value added of emerging industries including exhibitions, financial services, traditional Chinese medicine and cultural start-ups had increased 23.6 percent from 2015.

For example, the average wage of individuals in Macao is higher than in Southeast Asian countries, so developing labor-intensive industries would be less competitive, according to local officials. The Macao SAR government has invested heavily in developing traditional Chinese medicine, and it will increase its exports of these products to Portuguese-speaking countries and Southeast Asian countries.

In addition to enhanced cooperation with the Greater Bay Area, local businesses in Macao expect to play a larger role in connecting China with Portuguese-speaking countries, as part of an effort to take part in the BRI.

"For historical reasons, Macao had close ties with Portuguese-speaking countries and it could continue playing a role as a bridge as well as a platform in that aspect," Teresa Mok, coordinator of the support office of the Permanent Secretariat of Forum for Economic and Trade Cooperation between China and Portuguese Speaking Countries (Macao), told the Global Times.

"Every year, we helped coordinate representatives from those countries to seek investment opportunities in the mainland through Macao, and also helped mainland companies go abroad though Macao. Hopefully, we'll strengthen this role in helping companies tap into larger markets," she said.