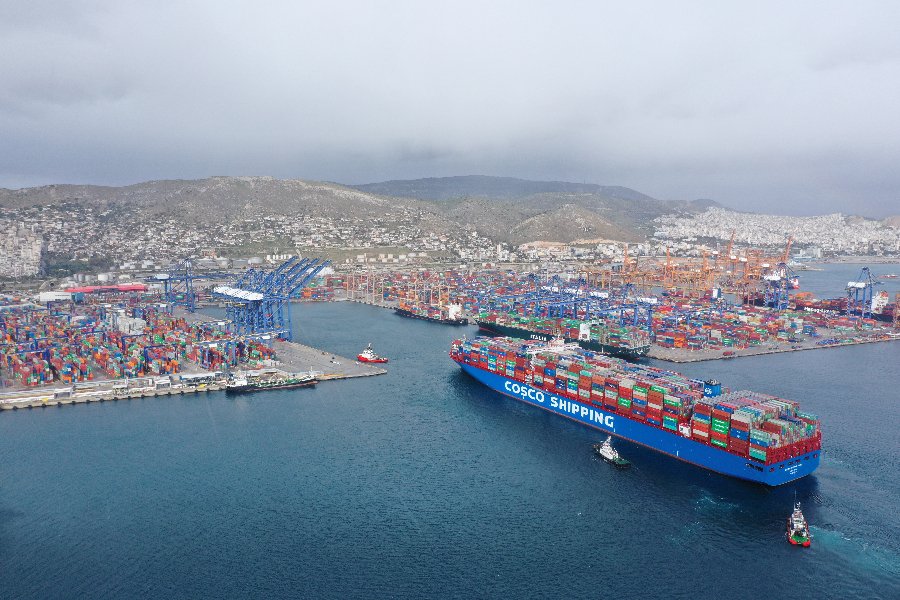 The port has enjoyed a long historical excellence since ancient times, but its fate took a wrong turn a decade ago. The throughput dropped dramatically and port facilities were barely functioning.

Things began to look up in 2008, when China's COSCO Shipping obtained a 35-year franchise right of Container Terminals 2 and 3 of the Piraeus.

Two years later, Piraeus Container Terminal S.A. (PCT), set up by a Sino-Greek management and operation team, officially took over the operations of the two terminals.

In 2016, COSCO Shipping purchased 67 percent of the stakes in Piraeus Port (OLP) and officially took over the port's management and operation in August.

Tassos Vamvakidis, PCT Commercial Manager, who have been working with the Piraeus port providing service to shipping lines for the past 40 years, still remembered the gloomy times.

"We were suffering a lot before COSCO takes over. The customer service at the port was very poor ... when I understand there is an option to change, I happily joined the group for that," he told Xinhua.

The road to success was not always rosy. "It was one of the very first private investments in Greece ever, so the general reaction of the unions was not very good. And it took us so much time to clarify that COSCO Shipping is an investor, not an invader," Vamvakidis said.

Improvement was quickly seen. The port's container throughput has increased from 880,000 TEUs in 2010 to 4.9 million TEUs in 2018, making Piraeus the number two of all Mediterranean ports.

The port is now ranked 36th among the 100 biggest ports of the world on the Lloyd's List, a much-referred to industry parameter, up from the 93rd when the COSCO took over.

Director of the Institute of International Relations in Athens Harry Papasotiriou said the Sino-Greek collaboration in the case of Piraeus is "a success story," as both sides benefited greatly.

"One of the foreign direct investment projects that I considered particularly successful is Piraeus. It is a real win-win situation," Papasotiriou said.

Vamvakidis believed the core element behind the port's success in recent years was "hard work with very good knowhow of our management, which comes from COSCO's experience from other ports they have or they manage, and also the investments in port infrastructure and new technologies in operating the port."

For Marina Omar, who works at the marketing department of PCT, the success story not only happens in the port, but also to herself.

Graduated from the renowned University of Athens in 2011 with a degree in History and Archaeology, she found that the most difficult lesson during her university life was finding a job.

Omar managed to get a job as management secretary for the administration department of PCT in 2012. Four years later, she got a promotion and went to its marketing department.

"PCT's growth is amazing, everyday here in the port is different," she said.

"I have gained experience and a big family which is my colleagues, and my promotion is a personal success for me, which has given me the opportunity to develop," she told Xinhua.

Omar said the Belt and Road Initiative has brought development in many cooperation projects between the Greek and Chinese enterprises.

"I think as the years pass and the Belt and Road Initiative is developed, we will have more growth for sure," she said.