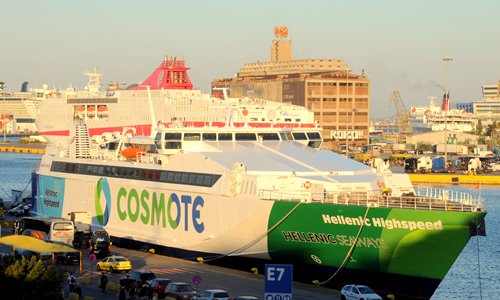 Economic cooperation between China and Greece under the Belt and Road Initiative (BRI) has yielded growing benefits for the Mediterranean country, which brings in rising investments and props up Greek tourism sector, one expert told the Global Times on Wednesday.
Greece has consistently supported the China-proposed new silk road initiative. During this week's visit to China, Greek President Prokopis Pavlopoulos said that Greece "highly appreciates" the joint development of the BRI, according to a report of the Xinhua News Agency on Tuesday.
He also said that he appreciates the outlook on world civilizations proposed by Chinese President Xi Jinping, as well as the concept of building a community with a shared future for humanity, the report said.
Closer cooperation
China and Greece have been moving closer in economic cooperation in recent years. Being one of the first European Union countries to sign a memorandum of understanding to cooperate within the framework of the BRI, Greece has seen smooth cooperation with China on several key projects under the BRI.
For example, the State-owned China Ocean Shipping Group in 2016 took a 51 percent stake in the Greece's largest port, Piraeus Port.
"China's investment in Greece under the BRI, marked by COSCO's investment in Piraeus Port, has become an important driver of Greek economic growth," Chen Xin, a research fellow at the Institute of European Studies at the Chinese Academy of Social Sciences, told the Global Times on Wednesday.
With COSCO's investment, Piraeus Port's container handling ability jumped to No.36 in the world, compared with No.93 when COSCO acquired the stake, media reports said.
China State Grid Corp in 2017 took a minority share of 24 percent in ADMIE (Independent Power Transmission Operator), Greece's major power grid operator, for $320 million under a loan contract with Bank of China, marking another landmark deal in attracting Chinese investment to Greece.
Iason Rousopoulos, deputy chief financial officer of ADMIE, told the Global Times in an earlier interview that Greece, as a beneficiary of the BRI, welcomes more Chinese investment.
Specifically, it welcomes cooperation in energy -- not just renewable energy but also in other fields like storage and electric vehicles, where Chinese companies have technology advantage.
Tourism boost
With regard to infrastructure cooperation, the BRI has also helped lift many industries in Greece because it brings economic interaction with China.
Tourism is now booming. Greece, with islands scattered around the Mediterranean, has received more tourists from China in recent years as people-to-people exchanges boom under the BRI.
In 2018, Greece was one of the top 10 destinations for Chinese travelers in Europe at one of China's largest online travel platforms Ctrip, said a report the company sent to the Global Times.
Bookings for package tours for honeymooners in Greece doubled at the platform last year.
"Chinese tourists' increasing presence in Greece could strengthen the country's tourism and services sectors, where it already has advantages, and accelerate the development of related sectors such as hospitality and insurance," Chen added.
Greece's support of the BRI is just one example of the increasingly welcome attitude of European countries toward BRI. In March, Italy signed a BRI memorandum of understanding with China.
"Under the BRI framework, European countries could negotiate more convenient inspection and quarantine terms with China to enlarge agriculture exports, which will serve as substitute for US agricultural products amid their protracted trade war," Chen noted.