China will build a green and efficient shipping system to achieve high quality development of the maritime sector, a senior official said on Thursday. 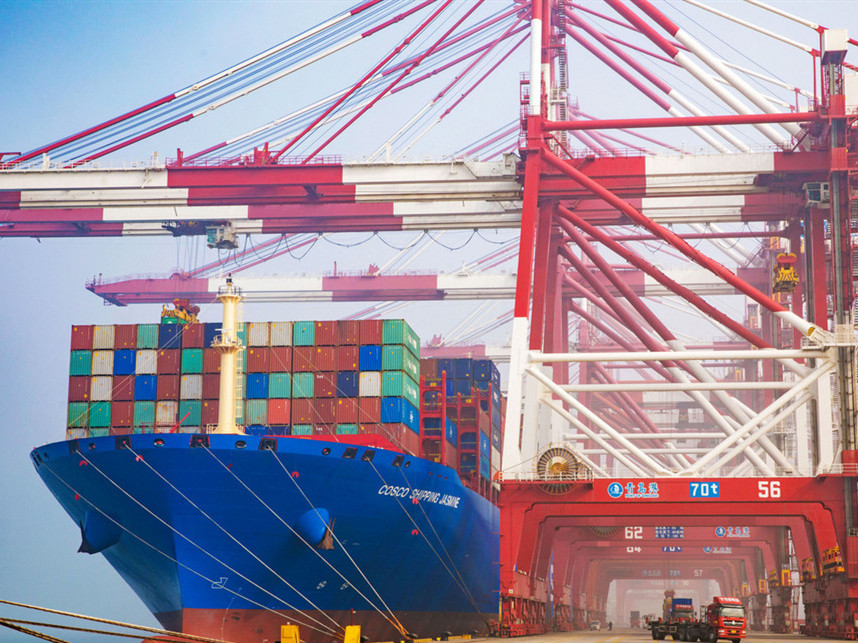 A shipping cargo ship loaded with containers to be shipped abroad berths on a quay at the Port of Qingdao in Qingdao, East China's Shandong province, Jan 14, 2019. (Photo: IC)

"We will strive to realize high quality development in the sector, making China a world leading maritime powerhouse to prop up the nation's economic and social development," said Liu Xiaoming, vice-minster of transport, at the China Maritime Forum 2019 in Ningbo. The forum is a major event to mark the 15th Maritime Day of China, which fell on Thursday.

Due to its huge freight volumes and low transport fees, the shipping sector serves as the main transport method of international trade, providing pivotal support to the international industrial relocation and segmentation of production of global multinationals.

"So, pushing ahead with high development is vital. There is also an urgent need to lower costs during the process of global economic integration, thus enabling enterprises to allocate effective resources on a larger scale," he said.

Liu called for better innovation in the maritime service sector and the speeding up of application of technologies such as AI, 5G and the Beidou Navigation Satellite System to boost the development of smart shipping, to make China "a true shipping powerhouse globally".

Also on Thursday, a proclamation was jointly issued by the Transport, Foreign Affairs and Natural Resources ministries and other government agencies to call on maritime-related workers and professionals to work together in advancing the interconnectivity, high level openness and high quality development of the maritime Silk Road in the New Era.

The scale of China's cargo fleet currently ranks second globally, with the average vessel three years younger than the global average, sources from the Ministry of Transport show.

Mao Jianhong, chairman of the Zhejiang Provincial Seaport Investment & Operation Group Co Ltd and president of the Ningbo Zhoushan Port Group, said at the forum that the company will strive to introduce more foreign investors to make contributions in mineral, oil and other industries in the port area. Mao is also looking to attract more high value-added shipping service companies to the port, thus realizing mutually beneficial outcomes through the integration of port and shipping.

Annual cargo surpassed 1 billion metric tons at Ningbo Zhoushan Port in 2018, making the port the first in the world to exceed such volume.

The annual container count at the port has hit a record high of 26 million standard containers, ranking among the top three ports in the world.