Global Lawyers Forum kicked off Monday in Guangzhou, capital city of Guangdong province, aiming to deepen exchanges and cooperation among lawyers around the world. 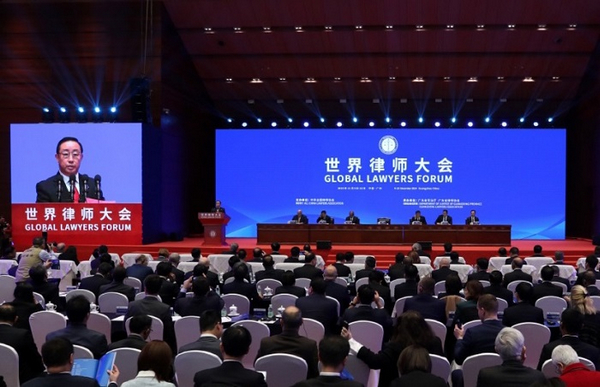 The two-day forum has attracted about 800 lawyers, judicial officials and legal experts across the world and will cover topics including legal services related to the Belt and Road Initiative, science and technology, international trade and dispute resolution.

Fu Zhenghua, China's Minister of justice, said in his opening remarks that the forum is the first world lawyers' event hosted by China. It is a practical action for Chinese lawyers to facilitate a communication and cooperation platform and promote a bigger role for lawyers in the global governance system.

Fu said this year also marks the 40th anniversary of the restoration of China's lawyer system which has made great progress along with the development of China's rule of law. Over the past 40 years, the number of law firms in China has grown from 70 to more than 30,000 and practicing lawyers have increased from about 200 to more than 460,000 who have become an important force for the country's comprehensive governance by law.

They are also active participants in the international legal service market to help serve the development of international economy and trade, he added.

He suggested lawyers and bar associations around the world keep expanding cooperation and promote the signing of bilateral and multilateral agreements by governments, bar associations and law firms, break down barriers and open markets to each other and actively innovate and improve the quality of legal services with the integration of advanced technology.

"China's door will only open wider and wider with increasing opportunities provided by China's reform and development," he said, adding that China will unswervingly promote the comprehensive rule of law, develop the legal profession and push forward the exchanges between Chinese and foreign lawyers.