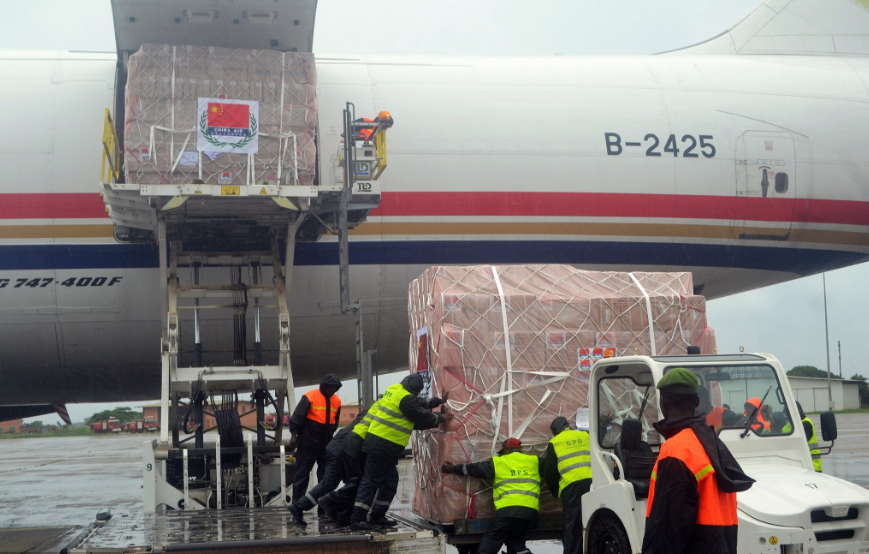 Workers unload medical supplies from China, worth 4.9 million US dollars, for countries hit by the Ebola outbreak from an airplane at the Conakry airport, Conakry, Guinea, August 11, 2014. (Photo: VCG )

With the help of China, Guinea has established industrial parks in some areas, but Guinea's President Alpha Conde said he hopes to encourage more Chinese companies to invest in his country, be it in agriculture, industry or infrastructure.

The Guinean president made the remarks during an interview with CGTN.

This year coincides with the 50th anniversary of China's deployment of medical teams to Guinea. In the interview, Conde highly appreciated China's medical aid to his country.

"After the independence referendum in Guinea in 1958, most French doctors withdrew. We were isolated and helpless, and lacked medical resources. The arrival of Chinese doctors was crucial for Guinea. They replaced the French doctors, and since then the two countries have strengthened their cooperation in the medical field."

Conde continued: "China also built the China-Guinea Friendship Hospital, which has become a famous public hospital in Guinean capital Conakry. With its expansion, our patients basically do not need to pay high fees to be treated in France or Morocco. This not only allows us to heal more patients, but also saves medical costs."

The Guinean president also thanked China for its help in personnel training: "In terms of management training, China has provided many scholarships. Guinea now has a large number of officials training in the fields of military or science and technology in China."

On the Belt and Road Initiative, he said the main challenge facing Africa today is achieving industrialization: "The land of Africa is very rich, with abundant raw materials and water resources. But to get rid of poverty, the first thing is to achieve industrialization."

He said China offered a lot of help in the industrialization of his country.

"Through China's assistance, we are now able to generate electricity on our own, and industrialization is inseparable from electrical energy. China also helped us build roads － a country cannot develop without roads and railways. China also helped us solve an energy problem, which is the basis for Africa's transformation and industrial development."

Speaking about the upcoming China-Africa Cooperation Forum in Beijing, Conde thinks that it will move the cooperation between the two countries a big step forward, especially under the framework of President Xi's new policy.

"It's now time to see what Africa can do in it," he emphasized.