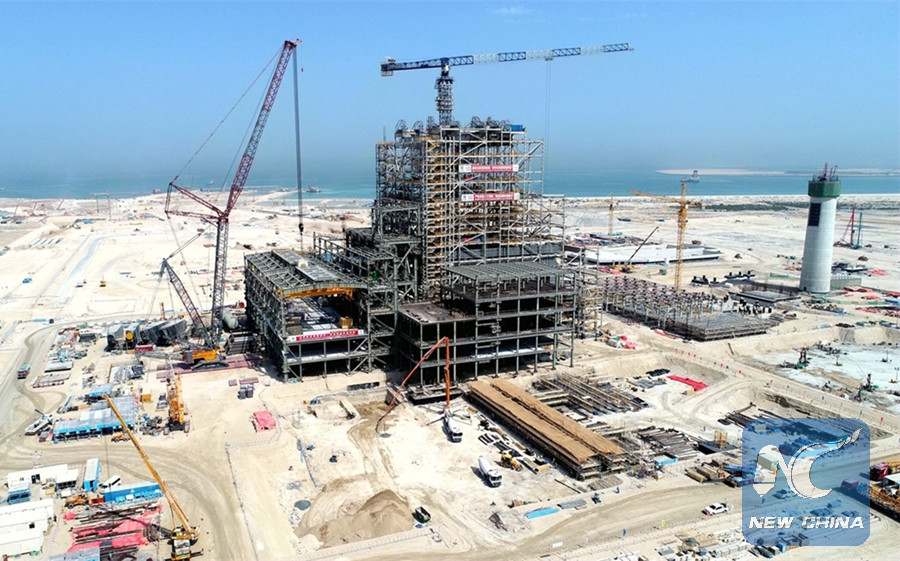 As Mideast first power station with Chinese venture in investment and construction, the Hassyan Clean Coal project in Dubai of United Arab Emirates (UAE) is on track, faster than expected, for the goal of starting operation by 2020.

Located on the southwestern coast of Dubai, just near the family leisure park Dubai Park and Resorts, the project is currently witnessing 2,000 workers working in two shifts per day, each for six to eight hours, even facing high summer temperatures.

The project was started by the Dubai Electricity and Water Authority (DEWA) in November 2016 under a joint venture with ACWA Power Harbin Holding Company, consisting of Saudi Arabia's ACWA Power and China's Harbin Electric International.

"Once fully completed by 2023, this clean coal power station will be the first of its kind in the Middle East, a symbol of UAE-China green energy partnership, and a successful joint venture under China's Belt and Road Initiative," said Tie Sijia, deputy manager of the Dubai Hassyan Power Plant project.

"The 3.3-billion-dollar power station will provide 20 percent of Dubai's future energy mix," Tie said, explaining each of the four power units using clean coal in the station will generate 600 MW through the use of ultra-supercritical technology after completion.

He said over 30 percent of the project has been finished, and by 2020 when Dubai hosts the World Expo 2020, the first of the four units will start generating electricity.

Dubai ruler Sheikh Mohamed bin Rashid Al Maktoum, who is also UAE prime minister, has set the goal of improving Dubai to the greenest city in the region.

"The cooperation among the different nationalities works very well," said Vladimir Donovetsky, the site planning manager, who is Romanian with work experience in Libya.

He added that "we learn a lot from each other and the atmosphere is very cooperative because the construction site adheres to the highest international standards and that supports our focus on bringing things forward."

US engineer Gary Lexa, project director of Hassyan Energy, is likewise upbeat. "The team is very international and we share our experience. I once worked for Chinese firms in the United States and in China's Wuhan on power generation projects," said Lexa.

The project will run on imported coal as the UAE, a major global oil supplier, has no coal reserves.

"While building the project, we pay high emphasis on environmental protection by for example enabling the indigenous turtles to pass across the coast," explained Tie.

In order to ensure the highest environmental protection efforts, Harbin Electric International works together with DEWA and environmental groups in Dubai.

China was UAE's top trade partner from 2014 to 2016, during which the bilateral trade amounted to 141.74 billion US dollars.

About 300,000 Chinese nationals now live in the UAE, while over 4,000 Chinese businesses operate in the Gulf state.