A worker holds onto shelter as rain falls on the construction site of project Section 3 of the Extension of the Southern Expressway in Sri Lanka on Sept 23, 2018. [Photo by Li Ping/chinadaily.com.cn]

Heavy rain poured down as road builders worked on Section 3 of the extended highway in Sooriyawewa town of Hambantota, Sri Lanka's Southern province on Sept 23. The unexpected rain and the season's capricious weather were hampering construction work.

Luckily for the workers, the main road has already taken shape – the section is actually gearing up for opening for traffic in December.

Speeding up traffic in the Southern province

Extension of the Southern Expressway in Sri Lanka is one of the major infrastructure projects jointly built by Chinese and Sri Lankan workers under the framework of the Belt and Road Initiative. The 96-kilometer project was undertaken by three Chinese companies, with a $1.9 billion concessional loan from the Export-Import Bank of China.

The line is divided into four sections. The 30-kilometer Section 1 will connect Matara and Beliatta; Sections 2 and 3, 41 km in total, run from Bliatta to Andarawewa; Section 4, 25 km, links Andarawewa with Hambantota.

Construction work started in 2016 and is expected to finish in December 2019. The extended roadway will help speed up traffic between Matara and Hambantota in South Sri Lanka and promote the flow of people and transportation of goods between Hambantota and capital city Colombo, according to China State Construction Engineering Corporation (CSCEC), a global top 500 enterprise responsible for Sections 2 and 3.

"When it's completed, travel between Colombo and Hambantota will be shortened from four and a half hours to around two," said Jia Ruihua, deputy general manager of CSCEC's Sri Lanka branch.

Section 3, a 15-km part extending from Wetiya to Andarawewa will be first put into use in December and will be a two-way four-lane expressway, with a design speed of 120 km per hour.

A road co-built by Chinese and Sri Lankan workers

The extended highway has helped create 15,000 job opportunities for local people since 2016, according to CSCEC. It has diversified job choices in areas along the project where people largely rely on farming and growing fruit.

Nalin Manawadu, 48, has worked as a project coordinator in the company for more than two years. A veteran in coordinating, Manawadu's main responsibility is talking to local government and residents, which also includes dealing with demands and complaints from villagers in surrounding neighborhoods.

"At the very beginning, locals had no idea what Chinese people are doing here. So we explain to them and show them pictures (of the future)," Manawadu told Chinese media in an interview. He said the project has gradually been recognized and welcomed by locals because of the convenience in traffic it will bring.

"Many farmers (in Sooriyawewa) grow fruit and sell them to big cities like Colombo. But now it takes eight or nine hours to transport fruits and vegetables there. After such long travel, some fruits may be damaged," Manawadu said. "After finishing this construction, time of delivery will be reduced to two or three hours," he said, adding, "It will help increase the economy." 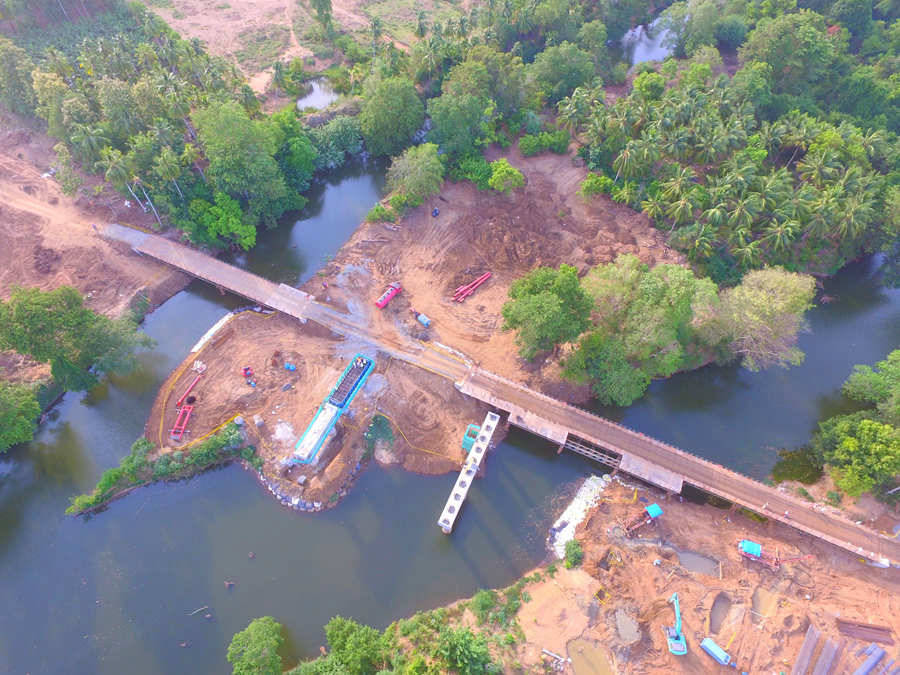 Part of Section 3 has been put into use. [Photo provided to chinadaily.com.cn]

"I believe it's the common wish for hundreds of Chinese and Sri Lankan working staff here to build a benchmark project that could represent friendship between people in the two countries," Jia noted.

The company said construction quality is strictly in line with design requirements and all materials are rigorously tested before application.

Wimal Kandambi, a representative from Sri Lanka's Road Development Authority, said the construction of Section 3 is "progressing rapidly with excellent performance in safety, environment and quality."

In the early stage of the project's implementation, however, land application and requisition and searching for engineering soil were the major problems facing the team. Jia said both the Chinese and Sri Lankan governments have offered a helping hand to solve these problems.

Amid complaints of dust from nearby communities, the company has set up more than 150 dust barriers for affected areas. "We've built dust nets and sprinklers to control dust to let local people know that we'll always take up these social responsibilities," Jia said.

Dust control is only one aspect of management's efforts for environmental-friendly construction. Before commencing the project, the company said it has worked with Sri Lanka's National Building Research Organization as well as the Geological Survey and Mines Bureau to monitor air, water, noise and other factors to reduce the effects on the environment.