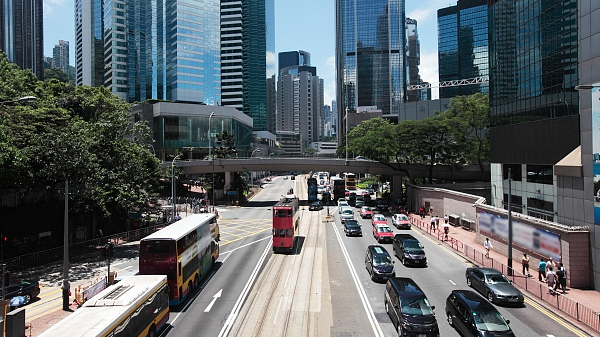 Hong Kong, both a "contributor" to and "beneficiary" of the motherland's 40 years of reform and opening up, should uphold the original spirit of the "one country, two systems" principle and continue developing jointly with the country, Chief Executive of Hong Kong Special Administrative Region (HKSAR) Carrie Lam said Monday.

Lam made the remarks at the National Day reception held by the HKSAR government to celebrate the 69th anniversary of the founding of the People's Republic of China.

"The concept of 'one country, two systems' was advanced, first and foremost, to realize and uphold national unity... Today, as we celebrate the National Day, let us not forget the original spirit of 'one country, two systems' but bear in mind the mission of upholding our country's sovereignty, security and development interests," Lam said when addressing the around 4,000 attendees including members of the HKSAR executive and legislative councils, the consular corps, government officials, community group leaders and members of various community sectors.

Lam said this year's National Day celebration is "particularly meaningful" as it coincided with the 40th anniversary of China's reform and opening up.

"Hong Kong has been playing the role of a 'contributor' as well as a 'beneficiary' in China's reform and opening up," she said. "In these 40 years, Hong Kong has been leveraging its advantages to serve the country's needs, developing jointly and sharing prosperity with the country."

As the country is entering a new historical era for further development, Hong Kong must keep reinforcing and enhancing its global competitiveness, proactively seize the opportunities arising from the Belt and Road Initiative and the development of the Guangdong-Hong Kong-Macao Greater Bay Area, as well as better integrate into the overall development of the country, Lam said, pointing out that the HKSAR government has been working with the strong support from the central government to create new areas of economic growth.

"For such work to flourish and bear fruit, as for a tree to grow tall and luxuriant, its roots must run deep and strong," she said, stressing that the "roots" lied in the upholding of the principle of "one country".