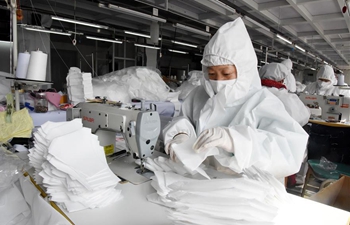 HONG KONG, March 2 (Xinhua) -- An official of Hong Kong's Centre for Health Protection (CHP) emphasized on Monday that the public should keep social distance to reduce the spread of the COVID-19, as Hong Kong has seen some clustered outbreaks of the disease.

Chuang Shuk-kwan, head of the CHP's Communicable Disease Branch, said at a daily press briefing that Hong Kong has so far registered 98 confirmed cases and two probable cases of COVID-19.

Out of the two probable cases, which involved two passengers of the virus-hit cruise ship Diamond Princess, one was preliminarily tested positive for the virus.

The confirmed COVID-19 cases in Hong Kong included not only imported cases, but also locally-infected cases with unclear sources, as well as multiple cases linked to clustered outbreaks because of family gatherings, colleague parties or Buddhist temple visits, Chuang said, adding that the public should maintain personal and environmental hygiene and keep social distance, so as to slow down the spread of the virus.

Out of Hong Kong's 98 confirmed cases, 36 patients have been discharged from hospital upon recovery, while 60 remain hospitalized, including one in critical condition and three in serious condition, Chief Manager of Hong Kong's Hospital Authority Linda Yu said at the briefing.

Meanwhile, more public services in Hong Kong started to resume on Monday as the staff of various departments of the Hong Kong Special Administrative Region (HKSAR) government gradually returned to their positions, after a special work arrangement was announced over a month ago.