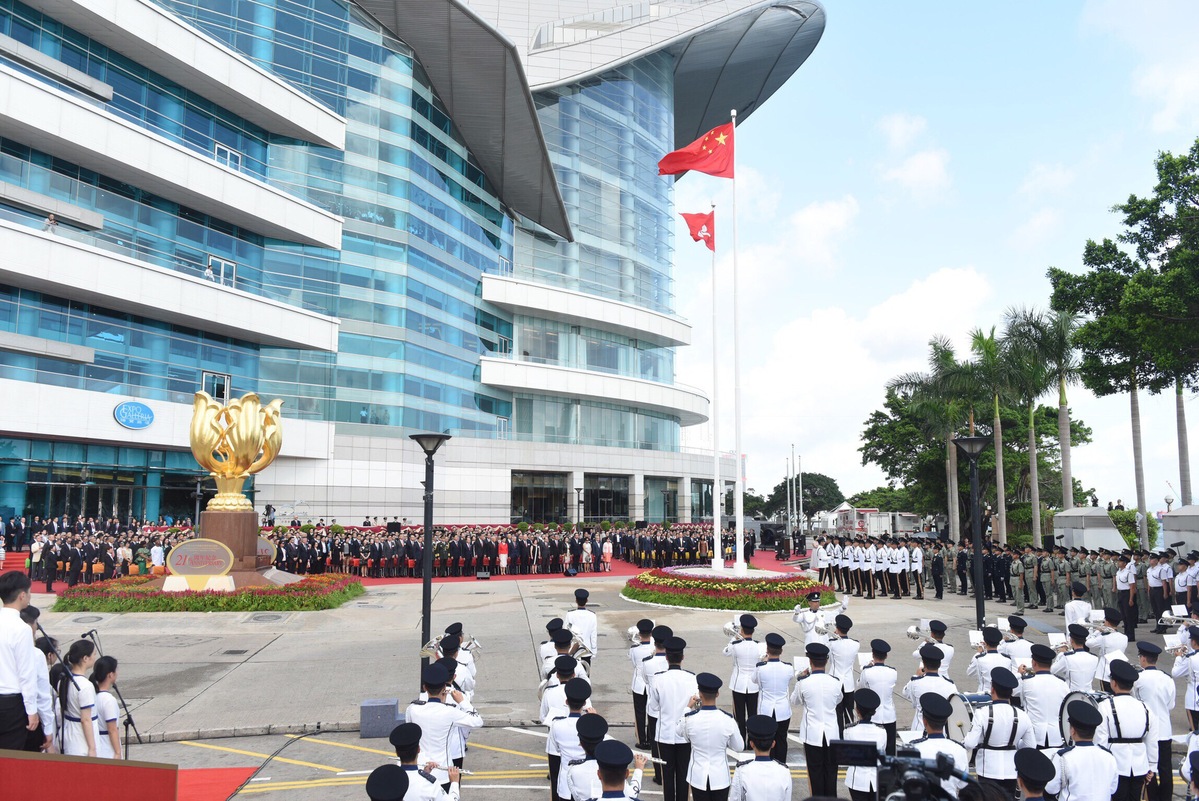 A flag-raising ceremony is held to celebrate the 21st anniversary of Hong Kong's return to the motherland in Hong Kong on Sunday morning. [Photo/Xinhua]

Carrie Lam Cheng Yuet-ngor, chief executive of the Hong Kong Special Administrative Region, said on Sunday she has "even greater confidence in Hong Kong" a year after taking office, thanks to strong support from the central government and joint efforts from different sectors.

She made the remark to about 2,000 guests, including representatives of the central government and the SAR government, foreign diplomats in Hong Kong and local dignitaries, at a reception celebrating the 21st anniversary of Hong Kong's return to the motherland on Sunday morning after a flag-raising ceremony.

During his three-day inspection tour from June 29 to July 2 last year, marking the 20th anniversary of Hong Kong's return to the mainland, Xi expressed his cordial care for Hong Kong and gave four imperatives.

Xi's visit created the exceptionally favorable ground for the current-term Hong Kong government to run the city in accordance with the law, assume a proactive role, develop the economy and improve people's livelihoods, Lam said.

Over the past year, Hong Kong maintained robust economic growth, recording a 3.8 percent increase in real gross domestic product in 2017, followed by 4.7 percent in the first quarter of 2018. The unemployment rate dropped to a 20-year low of 2.8 percent.

Lam and the SAR government's work and achievement during the past year was recognized by Wang Zhimin, director of the Liaison Office of the Central People's Government in the SAR, who said at a separate event on Sunday that her first year was a "good start".

Wang said Lam and the SAR government managed the city in accordance with the law and implemented the "one country, two systems" principle by making full use of Hong Kong's unique competitiveness and actively joining the national development.

Wong Kwok-kin, a Legislative Council member from the city's biggest labor union, said Lam is bold and resolute in building public trust in the government, improving the administrative-legislative relationship and fostering social cohesion.

Starry Lee Wai-king, chairwoman of the Democratic Alliance for the Betterment and Progress of Hong Kong, the city's largest political party, agreed with Wong.

Lee noted that in the past year there was an increase in the number of bills and the amount of works funding passed by the Legislative Council.

After assuming office, the chief executive has attended legislative meetings often to answer questions from lawmakers.

Enhanced communication between the government and the legislature means greater efficiency, Lee said.

Speaking of the government's work in the future, Lam emphasized the importance of engaging young people.

The government has been providing young people with more opportunities to take up internships on the Chinese mainland for deeper understanding of national developments and to participate in the Hong Kong SAR's affairs.

Young people should aspire to develop into a new generation with a sense of national identity, an affection for Hong Kong and an international perspective, who are also passionate about and committed to the well-being of the Hong Kong community, Lam said.