China faces a huge gap when it comes to imports of Basa fish, a freshwater meaty fish that is served on Chinese dining tables as fillets with hot pickled vegetable soup, and Myanmar is in a unique position to fill that gap, industry experts said in a recent bilateral vocational exchange program. 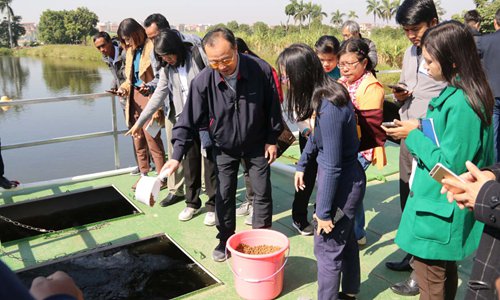 "China surpassed the US as the world's top importer of Basa fish in 2016 after it loosened relevant import restrictions," Zhang Jiasong, an expert with the South China Sea Fisheries Research Institute, told the Global Times on the sidelines of the course held in South China's Guangdong Province in December. The program aims to boost cooperation between China and ASEAN countries under the framework of the Belt and Road initiative.

With improved living standards in China, fish consumption is rising and Basa fish fillet is used in hotpot meals.

Xiao Haidong, a manager at Guangdong Nutriera Group, told the Global Times that Myanmar is an ideal country to breed Basa fish. The fish is easy and cheap to breed and it has more tolerance of low-oxygen environments, which suits conditions in Myanmar, where electricity-powered oxygen boosters are not widely available.

Vietnam is the world's current leader in Basa fish production, with 1.4 million tons of annual output. But the country mainly exports its Basa fish to the US.

Aquaculture exports are an important source of foreign exchange for Myanmar. According to Myanmar industry figures, the country earned $711 million in fiscal 2017-18 from such exports, a record high. However, the figure was much less than its neighbors including Vietnam and Thailand.

Vietnam, which is only half the size of Myanmar, exports more aquaculture products in a month than Myanmar does in a year.