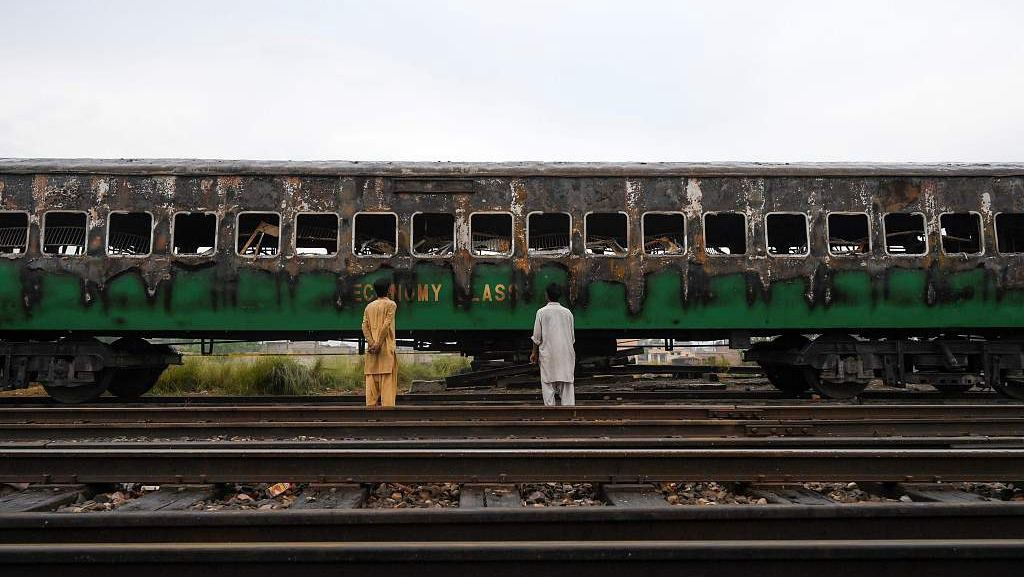 Editor's Note: Tom Fowdy is a British political and international relations analyst and a graduate of Durham and Oxford universities. He writes on topics pertaining to China, the DPRK, Britain, and the United States. The article reflects the author's opinions and not necessarily the views of CGTN.

On October 31,  a train fire in Pakistan led to over 74 deaths. The blaze, started by an exploding gas cylinder and is the worst to hit the country in a decade. Islamabad is no stranger to railway accidents, with a detailed 74 taking place in the past year alone and over 757 across seven years. Causes have related to inadequately enforced safety regulations, overcrowding, collisions, and aging rolling stock. With rail travel being Pakistan's primary mode of travel and carrying an estimated 65 million passengers a year, the severity of this problem cannot be underestimated.

However, there is very much a solution, one which is already ongoing. For all the negative coverage concerning this week's tragedy, Pakistan's railways are posed to receive a timely and much-needed transformation.

The China-Pakistan Economic Corridor (CPEC) has set out several substantial investments and schemes which will not only build and rebuild railway routes throughout the country, while completely modernizing the infrastructure and rolling stock. Pakistan thus has its answer, and in turn, must place its faith and political will in the corridor's success.

The China-Pakistan Economic Corridor, as has been per for Belt and Road Imitative, places railway development as the keystone. For a country to sufficiently develop itself and create feasible business and supply chains, it must have an efficient, convenient, and reliable railway infrastructure.

The Corridor endeavors to do just this: rebuilding, modernizing, and expanding Pakistan's own railways to connect the entire country, create major freight links to ports and, of course, make everyday rail travel smooth, safe, and convenient. The total investment in the country's railways totals about six billion U.S. dollars.

What exactly is being planned and what is underway?

Firstly, the CPEC is working on rebuilding the country's aging first mainline, which links Karachi and Peshawar. The modernization scheme aims to increase freight capacity, and train operating speed, with its second phase set to be completed by 2021.

The country's second and third main lines will also receive similar upgrades. Along with this, the CPEC is also building a new "Khunjerab Railway" which will stem from Havelian to the Chinese border itself. This is set to be completed by 2030.

In addition to railway modernization, China has pledged to finance the construction and purchase of new rolling stock for the lines in question, including over 250 new passenger coaches, as well as the reconstruction of 21 railway stations. Also of note alongside these procurements is the creation of the Lahore Metro, the first mass transit system of its kind in Pakistan, which nearing completion is to be opened next year.

Given all that is underway with the corridor, Pakistani politicians have a clear and defined answer to the proliferation of railway accidents. However, this does not mean that there is nothing left to do on their behalf.

As investment pours into the country's infrastructure, it is up to authorities to ensure greater levels of governance, competence, and regulation on how the railways themselves are used and managed; especially if they seek to reap economic rewards for it at the same time.

A brand new railway cannot compensate for passengers bringing cooking equipment on board which has posed huge liabilities such as the recent fire. There must be a clear improvement in regulatory and safety standards.

In addition to improving standards, Pakistani leaders must also be prepared to exert political will towards the completion and progress of the CPEC, which amid this tragedy is now more urgent than ever. The two aspects must come together if progress is to be made.

Safety standards cannot be improved without investment, and investment cannot work without improved standards. Rather than subtly downplaying it and having doubts, the country's authorities must conceptualize the corridor for what it is, that is a vision to transform Pakistan into one of the economic powerhouses of the world, underpinned with world-class infrastructure. The recent accident highlights the current weaknesses the country is facing. It is both a human tragedy and a demonstration of its current limitations.

Thus, there should be no backtracking, the corridor must be pursed as a core strategy and a staple vision for change, which can not only secure future prosperity for the country but in turn massively improve the livelihoods of its citizens. No country can simply go on with so many severe and deadly railway accidents, so frequently and chaotically.

Yet for Pakistan, part of the solution is already here in the form of the CPEC, and thus it all boils down to how much the country is willing to make it happen. Massive investment in its railways, combined with a broader local effort to improve railway standards, can work in tandem to ensure these horrible accidents become a thing of the past.