BRI NEWS How China, US misunderstand each other

How China, US misunderstand each other 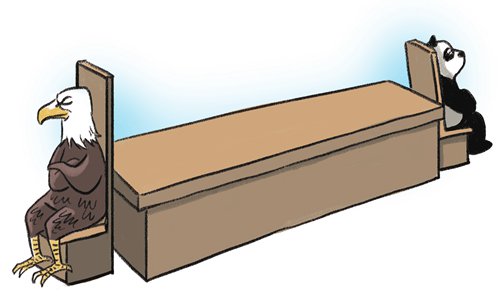 As the China-US trade conflict escalates, there has been confusion in markets and media. There are different terms including trade dispute, trade war, economic war and soft war to describe the ongoing bilateral row, indicating that China and the US have differences in understanding, which may influence China-US relations and global order.

The two countries have misunderstandings about some important issues.

The European Union was expected to eliminate differences among countries, but its function is now under scrutiny. Even the US, which used to advocate liberalism and internationalism, focuses on sovereignty and its own interests now. Countries represented by China overestimated the influence of economic cooperation.

Some Chinese people believe that economic cooperation can surpass the boundary of sovereign states and help states resolve disputes caused by competition. Consequently, China used to stress global governance and proposed the Belt and Road initiative, trying to expand the interdependence between countries into the interdependence between regions and contribute to world peace and stability.

But China has found out that economic cooperation can't fundamentally resolve the conflicts between countries and that the sovereign state system is still the underlying basis of relations. In this context, people instinctively oppose hegemony especially when the world is at peace. It is not good news for the US, but nonetheless has helped China's rise.

However, if China tries to seek a leadership role, it will meet opposition too. In other words, people are not against the US, but hegemony and foreign control. Any country that wants to replace the US will be opposed by the international community.

China and the US have misunderstandings in the trend of human society's development. Some people misread globalization. Integration and fragmentation have alternated in human society. The wave of globalization swept over after the end of the Cold War when barriers disappeared and countries were connected faster than ever. It was once unimaginable that the living condition of American farmers had something to do with that of Chinese farmers.

The changes took place so fast that many governments couldn't adapt, causing serious problems in many countries including China and the US. In such a context, it was reasonable for populism and protectionism to rise. They halted the progress of globalization and also provided a chance for the world to adjust. It would be easier to understand many problems if we think in this way, including the rise of Donald Trump.

Some people, especially American people, have blind faith in hegemony and believe that the US hegemony is reasonable and should be defended. However, it's quite common for major powers in history to experience vicissitudes, and China is one of them.

As the US has been through founding, development, rise and hegemony, it's natural for it to be on the decline. Besides, the harder a hegemonic country defends its leading role, the faster it declines. That has been proved many times in the past century.

For example, the German empire, Austria-Hungary, the Ottoman empire and the Russia empire during World War I, the empire of Japan, Nazi Germany and fascist Italy during World War II, the colonial empires represented by France and Britain after World War II and the Soviet Union during the Cold War. The US kept a low profile before World War II, and China was oppressed for a long time. However, these two countries survived and developed.

China and the US also have misunderstandings about China's reform trends. Some people in the US believe that although the Chinese economy has integrated into the international community, China's political reform is lagging behind and even shows signs of slipping backwards. However, politics and economics are always an organic whole, and economic reform is the most important part of political reform no matter whether it is Marxist or Western capitalist.

Another misunderstanding is that some Chinese people and pro-China foreigners believe that China has created a new "Beijing consensus" parallel with or even opposed to the Washington consensus. However, China's development in past decades was based on Marxism, Western capitalism and traditional Chinese culture.

Marxism originated from the Soviet Union and legalizes the Chinese political system today. Western capitalism is also called market economics in China and China learned it from the West, especially from the US. Traditional Chinese culture is represented by Confucianism and stresses family. In other words, the market economy, the core of the Washington consensus, is also core of the "China model."

More importantly, the "Beijing consensus" doesn't have universal values even if they really exist, as other countries don't satisfy the three above-mentioned concepts. The term "socialism with Chinese characteristics" indicates that the China model can only apply to China.

The main problem between China and the US is not merely a trade war, but a complex issue of politics, economics and strategy. Some US complaints about China are somewhat reasonable, but the US countermeasures are hegemonic and unacceptable.

China should acknowledge that it is the second-largest economy in the world and thus accept a higher standard of trade rules so that the US and the international community can get along with it better. The US should also change its mind and treat its relations with China and the world more rationally.

If a large conflict breaks out in trade or any other area, China and the US will both suffer the consequences, and that's not what the two countries' leaders and people want to see.