BRI NEWS How to summarize 2020 in one word?Foreign friends in Ningbo gave the answers

How to summarize 2020 in one word?Foreign friends in Ningbo gave the answers

The COVID-19 pandemic in 2020 cast a shadow across the world, making it difficult for everyone to get through in a short time. We walked through the streets and focused on foreigners living in Ningbo. They differ in their nationalities, occupations and experiences, but same in choosing to stay in Ningbo and standing together as well as living memories with us. 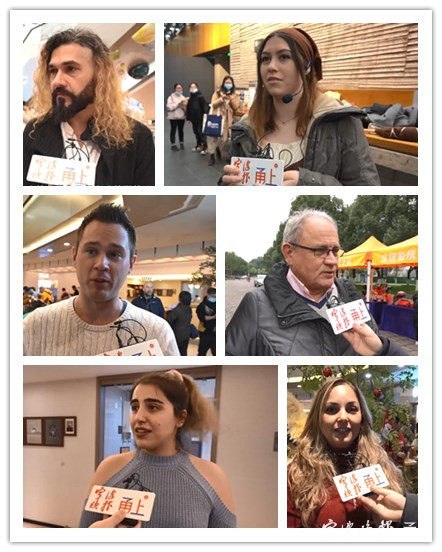 Hence we attempted to enquire: What did the year of 2020 mean to them? If one word is used to summarize Ningbo 2020, which one will that be?

A special event was staged in the Ningbo Museum on December 21st, 2020. It was the Chinese and foreign cultural and creative market held to celebrate the 15th anniversary of the establishment of friendly ties between Ningbo, China and Nottingham, United Kingdom (UK).

We met Ma Shile at the market. This was already his third visit to Ningbo in December. He was so tall that he could be easily recognized in the crowd. He preferred Ningbo to his hometown Moscow. “This is a city that is as comfortable as home, and I really like it.” he said.

Martin Challenor, a university academic from South Africa, walked towards us. He was a brilliant conversationalist and counted the days he had stayed in Ningbo, feeling that had already seemed a long time. “I've been living in Ningbo for 1,193 days,” he said. His humor made our communication easy and comfortable. In his eyes, the year of 2020 hasn't undergone easy for both China and Ningbo. “The whole world is confronted with challenges, and I was in Ningbo and witnessed the unity and bravery of this city.”

Various activities of cultural experience were interspersed in the market. Derek Irwin, associate professor of drama from the University of Nottingham Ningbo, China (UNNC), brought “Robin Hood” and his “merry men” and presented Story of Robin Hood, a bilingual children's drama, for all audiences.

Derek and his family now live in Ningbo; this city, though cold and humid in winter, has turned into the second home for them. “It has been so long since I arrived in Ningbo for the first time 20 years ago. ”

“The world looks so different this year, but we can’t keep away from where we live.” Derek said frankly. “In 2020, our family felt so lucky that we lived in a safe city like Ningbo during the pandemic.”

Derek's daughter Georgia was really charming with golden hair and fair skin. She wore a costume at the event like a Disney princess at large. “In my eyes, Ningbo is a city of strength, safety and courage in 2020, ” Derek said.

Eleni Oikonomou promoted her red wine with great passion at the market. “I moved to Ningbo two years ago. This is a city full of happiness and love.” She laughed with her mouth wide open, which showed her inner most feelings.

In front of the Israeli handcrafted jewelry booth, the designer Mulan Leon modeled earrings for customers. She moved to Ningbo seven years ago, and knows Ningbo well. “I will use the word hope to describe Ningbo in 2020. This year, we were all faced with challenges and experienced a lot, but I hope we are still optimistic and passionate for life, and believe in love.”