How vocational schools boost skills for Belt and Road partners

BEIJING, May 4 (Xinhua) -- "Now the train moves forward," said 20-year-old Arthitaya Sapkum who was attentively looking at a screen that simulates the window in the locomotive of a high speed train, while her classmates were operating the control system on a panel. 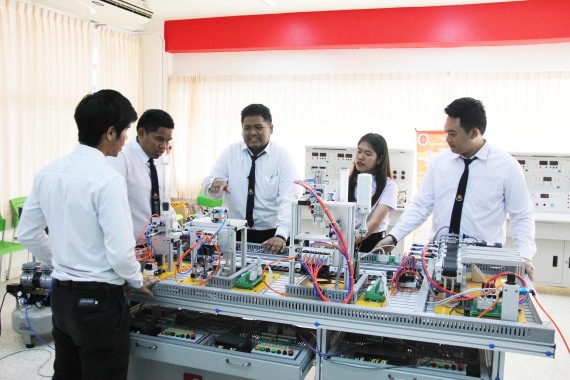 The China-sponsored training platform for simulated driving, an eye-catcher to students and visitors, sits on the second floor of the Luban Workshop in Thailand.

The project, which is named after Lu Ban, a legendary Chinese carpenter from the 4th century BC and launched by China's Tianjin Municipality, provides state-of-the-art technical and vocational training to serve various aspects of the Belt and Road Initiative.

"Studying here is good. We can easily understand how a train system is formed and how trains work," said Arthitaya, who was on a short-term training program with her classmates from Thailand's Ko Kha Industrial and Community Education College.

She is one of the over 2,000 students who received training at the workshop after it was established in March 2016 in Thailand. On the second floor of the workshop lies Tianjin Railway Technical and Vocational College Center, China's first overseas technical center for high-speed railway training. It is equipped with modern teaching equipment and remote education facilities for long-distance learning.

Since there is no high-speed rail in Thailand, all teaching materials and equipment in the center are provided by the Chinese side.

In the past three years, the workshop helped Thai students learn subjects from new energy car development and the internet of things to high speed trains. The Tianjin Municipality also offers scholarships through the workshop for study in China.

"In order to promote the Belt and Road construction, the Lu Ban Workshop provides academic education and skills training for partners in other countries. This is a bridge connecting China's vocational education with that of the world," said Lv Jingquan, deputy director of Tianjin Municipal Education Commission.

Jarun Youbrum, director of the Thai vocational school, is proud of the workshop, saying that the courses provided here can nurture talent for the future development of Thailand's high-speed rail system.

"We are the only one in Thailand and I think we should be a good example of Thailand-China cooperation on education and the implementation of Belt and Road Initiative (BRI) in Thailand," Jarun said.

Arthitaya and Jarun are among those who have been building support for China-Thailand cooperation within the BRI framework, which has achieved tangible results through mutually beneficial cooperation.

The Thai government is committed to the progress of the Thai-Chinese high speed rail project and hopes the project will be finalized as soon as possible, Thai Prime Minister Prayut Chan-o-cha told Xinhua last week before attending the second Belt and Road Forum of International Cooperation held in Beijing.

"As the Chinese proverb says, 'Unity Makes Everything a Success', we are pleased that the project has made good progress, and have taken the opportunity to learn more about high-speed railways and related technology," the prime minister noted.

Since 2016, eight Luban Workshops have been set up in Asia, Africa and Europe, and have trained more than 4,000 people in 17 majors covering mechanics, new energy, automobile, communications, catering, and others.

The program is not just a unilateral education provider, but involves two-way exchanges that help enhance ties and cultural links between China and other countries.

Two years ago, the Tianjin School of Commerce, sponsored by the Tianjin Food Group Co., Ltd., set up a workshop in Britain's Chichester College and succeeded in incorporating its professional training standards into Britain's national vocational qualification framework.

Earlier this year, students from the workshop put their culinary skills to the test when doing catering for the British prime minister and her guests.

It was the last day of January. At Number 10 Downing Street, London, Prime Minister Theresa May was hosting a Chinese New Year reception.

Steamed vegetable dumplings, crispy duck, eight types of canapes and dishes of exquisite quality impressed some 150 guests with a taste of Chinese delicacies.

Chances are rare for students taking a course on Chinese culinary arts at Crawley College of Chichester College Group (CCG) to put their learning into practice at the highest level, and they handled the challenge with flying colors with the help of Chinese master chefs from Tianjin.

"Many Chinese guests at the (10 Downing Street) event said they haven't had such authentic dishes for years," said Wu Zhengxi, who teaches culinary skills at the school in Tianjin and represented Chinese chefs at the reception. "I proudly told them we're with the Luban Workshop."

CCG, the largest further education provider in South East England, was identified as a course partner for the British Luban Workshop. The success attracted more intention to cooperate from British business and vocational education sectors.

"The future for Chinese cuisine in the U.K. just got a whole lot brighter," said celebrity chef Ching He Huang.

The workshop program, stressing the pillars of the BRI, promotes connectivity and people-to-people exchanges in the fields of education, business and culture.

Chinese authorities have pledged to enhance cooperation within the BRI framework by setting up more Luban Workshops, including 10 programs to offer vocational training for young Africans. The first one in Africa was launched in Djibouti in March, aiming to boost the country's overall development through the training of its youth.

The Belt and Road Initiative, proposed by China in 2013, refers to the Silk Road Economic Belt and the 21st Century Maritime Silk Road, aimed at building a trade and infrastructure network connecting Asia with Europe, Africa and beyond.

In less than six years, 127 countries and 29 international organizations have joined the initiative, through which China has made investments of more than $90 billion.

Last week, the Second Belt and Road Forum for International Cooperation (BRF) gathered around 6,000 participants from 150 countries and 92 international organizations, including heads of state and government, for three days in Beijing.

Klaus Schwab, founder and executive chairman of the World Economic Forum, said at the BRF that the BRF can be "a building block and a role model of" an advanced pattern of global cooperation that should be more sustainable, more inclusive and more collaborative.

The BRI "is now growing up into a mature initiative that can have even more impact," Schwab added.