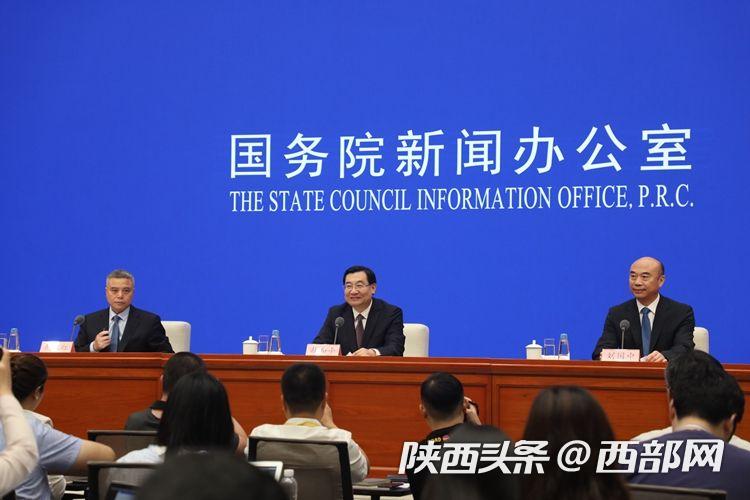 The Information Office of the State Council held a special press conference about Shaanxi Province in Beijing to celebrate the 70th anniversary of New China. Hu Heping, secretary of the Shaanxi Provincial Party Committee and director of the Standing Committee of the Provincial People's Congress, read a report and answered questions from reporters. Liu Guozhong, deputy secretary of the provincial Party Committee and governor of the province, also answered questions.

Hu Heping said that Shaanxi is a magical land with a long history, splendid culture, rich scientific and technological resources, strong innovation, superior location, beautiful ecology, good lifestyle and appealing tourist attractions, adding it is open and inclusive. Since the founding of New China 70 years ago, under the strong leadership of the Party, Shaanxi has achieved tremendous changes, moving from poverty to prosperity, from inland small cities to become an opening metropolis, from insufficient food and clothing to prosperous living, from a harsh environment of dust storms to plenty of green trees.

Hu said that since the 18th National Congress of the Communist Party of China, President Xi Jinping has been very concerned about Shaanxi's situation and the people of Shaanxi. Xi has given important instructions on many occasions. Since 2015, he has inspected Shaanxi and delivered important speeches there, putting forward the requirements of making progress. The whole province has studied and implemented the important speeches from President Xi Jinping's visits to Shaanxi and the important instructions to Shaanxi, firmly promoted the sustained and healthy development of the economy, steadily promoted the construction of modern agriculture with unique characteristics, steadily built up the culture, steadily completed the work of safeguarding and improving people's livelihood, and steadily implemented the comprehensive strict administration of the Party. Great progress has been made for the cause. People of Shaanxi must unite more closely around the Party Central Committee with President Xi Jinping as its core, keep in mind its original intention and mission, promote the new era to catch up with and surpass new meteorological  achievements, and celebrate the 70th anniversary of the founding of the People's Republic of China with outstanding achievements.

After the report, Hu Heping and Liu Guozhong answered questions with patience and facts. The questions were about the development of the western region, the establishment of the Shanghai Cooperation Organization agricultural technology exchange training demonstration base, the One Belt One Road, innovation and development and the masses rising from poverty and becoming rich.

Before the conference, Hu Heping and Liu Guozhong visited an exhibition, “Shaanxi Development Achievements on the 70th anniversary of the founding of New China.”