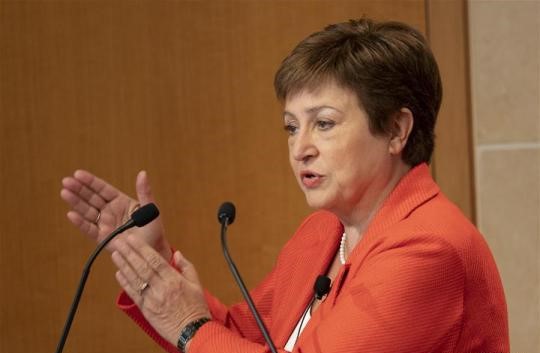 China's economy should return to normal in the second quarter following the novel coronavirus outbreak, whose impact on the global economy should be "relatively minor and short-lived", the top International Monetary Fund official said, as a senior Chinese banker also estimated the effect to be "temporary".

"The Chinese authorities are working to mitigate the negative impact on the economy, with crisis measures, liquidity provision, fiscal measures and financial support," IMF Managing Director Kristalina Georgieva said Saturday at the Finance Ministers and Central Bank Governors Meeting of the Group of 20 in Riyadh, Saudi Arabia.

The IMF chief said she had talked with Chinese central banker Yi Gang and other senior officials, assuring them of the global lender's support to China's policy measures.

The meeting in Saudi Arabia is set to discuss risks of COVID-19 to the global economy. The strain had claimed the lives of 2,442 people on the Chinese mainland, where confirmed cases had reached 76,936 by the end of Saturday.

Earlier this month, Georgieva said the IMF was gathering data to assess the full impact of the coronavirus outbreak in China, but hopes to see a "V-shaped" recovery.

On Saturday, the Bulgarian economist said the IMF is still learning about how the complex virus spreads, and "the uncertainties are too great to permit reliable forecasting".

Many scenarios can play out, depending on how quickly the virus is contained and how fast the Chinese and other affected economies return to normal, she said.

"In our current baseline scenario, announced policies are implemented and China's economy would return to normal in the second quarter," she said. "As a result, the impact on the world economy would be relatively minor and short-lived."

Growth of the world's second- largest economy would be 5.6 percent in 2020, which is 0.4 percentage point lower than predicted in the IMF's World Economic Outlook in January, according to Georgieva.

Global growth would be 3.2 percent, about 0.1 percentage point lower, she said.

"But we are also looking at more dire scenarios where the spread of the virus continues for longer and more globally, and the growth consequences are more protracted," she cautioned.

Chen Yulu, deputy governor of the People's Bank of China, China's central bank, said the novel coronavirus contagion has exerted some "downward pressure" on China's economy, with transportation, tourism and offline shopping bearing the brunt, but it will not last long.

"Supported by a resilient economy and ample room for policy adjustments, the People's Bank of China expects a quick recovery after the outbreak is contained," Chen said in an article posted on the bank's website on Sunday. The article was earlier published in the Financial Times.

The central bank, with other financial regulators, rolled out 30 policy measures to support enterprises heavily affected by the epidemic, particularly small and micro ones, private enterprises and the manufacturing sector.

Chen noted that the central bank will continue to implement the financial policies designed to support epidemic prevention and control efforts and facilitate a post-epidemic economic recovery.

Such policies include strengthening countercyclical adjustment of monetary policy, adopting structural monetary policy instruments when necessary, and ensuring stable functioning of the financial markets, according to Chen.

A recent survey of 399 companies from the United States and other APEC member economies found tax cuts and rent-reduction are the two areas where companies believe the Chinese government can assist them to overcome the financial difficulties they face due to the outbreak.

The survey on the extent of difficulties created by the epidemic, released by the American Chamber of Commerce in South China on Thursday, also found that regardless of the impact of the outbreak, 75 percent of the companies show high confidence in the future of China's economy and will not change their reinvestment plans.