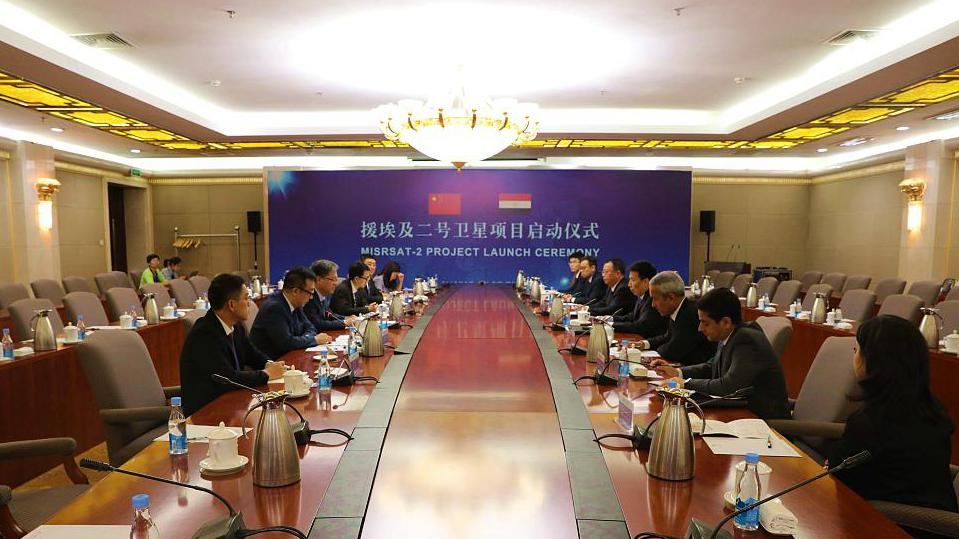 Egyptian and Chinese teams announced Sunday the start of the implementation phase of the China-funded "MisrSat II" satellite project.

During the kick-off meeting held at the Egyptian Space City near the country's new administrative capital, both sides signed the documents initiating the launch of the project.

On Saturday, a ceremony to launch the satellite project was held during the fourth China-Arab States Expo in Yinchuan, capital of northwest China's Ningxia Hui Autonomous Region.

Egypt and China signed in January an agreement on a 72-million-U.S.-dollar Chinese grant for Egypt's MisrSat II satellite, which is a small high-resolution remote sensing satellite.

Egypt sees the project as another major cooperation project between the two countries in the field of space after signing an agreement to build the Egyptian Satellite Assembly, Integration and Test Center which is expected to be fully established this year.

"This is the kick-off meeting for starting the project of MisrSat II satellite which will be implemented thanks to a grant from China," Ahmed al-Rafie, head of the MisrSat II Satellite project, told Xinhua, adding "the satellite will help Egypt with its development plans in many fields."

The official said the satellite will be developed through cooperative and joint work between Chinese and Egyptian teams who work in parallel, noting that there will be Chinese guidance throughout the project phases.

"This will provide the Egyptian side with experience in the development of satellite space systems," he said, adding that it will take the teams about 35 months to finish the building of the satellite.

"The design phases will be carried out in parallel in Egypt and China, but the assembly and integration of the satellite will be done in Egypt at Egyptian Satellite Assembly, Integration and Test Center," said the official.

In addition to the satellite, a ground control station and a ground application system to support the operation of the satellite will be also supplied, al-Rafie said.

Meanwhile, Chinese Ambassador to Egypt Liao Liqiang said he believes that China and Egypt have made "four firsts" in this project.

"The first is that Egypt is the first country to carry out satellite cooperation with China under the framework of the Belt and Road Initiative," he said.

The third, Liao said, is that China will help Egypt build its aerospace team and will jointly train Egyptian aerospace experts.

"The fourth is that after the project is completed, Egypt will be the first African country to have complete satellite assembly integration testing capabilities," he added.

Liao noted China is willing to work with Egypt to build Egypt's own aerospace science and technology talents for the independent development of Egypt's space field.

"We are also willing to make our contributions to the economic and social development of Egypt, including the fields of agriculture, environmental protection, and anti-desertification," the ambassador said.