Have you ever had a taste of Egyptian oranges, the delicacy favored by the Pharaoh? Despite the long distance between Egypt and China, these oranges are now within easy reach as the countries open up to each other and engage in cooperation.
Posters on Chinese shopping websites advertise that Egyptian oranges bathe in African sunshine and accumulate abundant nutrition during the sunny days and chilly nights, as the Nile nourishes the fruits.
Just before the first China International Import Expo (CIIE) opened in Shanghai, this Global Times reporter visited Egyptian fruit dealers and packers, and acquired a clear understanding of how the fruits were carefully selected and transported under the Belt and Road initiative (BRI) to end up on Chinese families' dining tables.
Talking about the significance of the CIIE, Rashad Abdel, economics professor at Cairo University, told the Global Times that it's worth recognizing that China is voluntarily opening its market further and sharing the opportunity of development with the outside world.
The CIIE will provide a huge market, development and employment opportunities to developing countries, he said.
Superfine oranges
Only a few years ago, Ashraf Eladwy, chief of Nile Establishment for International Trade, could not imagine selling the oranges to China. Now the Chinese market has become increasingly important for his company. Eladwy learned about the huge potential of the Chinese market in 2015 when he was attending an international fruit and vegetable exposition in Hong Kong.
He said he initially thought it would be difficult to enter the Chinese market, but things turned out to be very smooth. The openness of the Chinese market was beyond his expectations, as long as the products' quality meet with the requirements, he told the Global Times.
When he was researching the Chinese market, he also saw a lot of fruits imported from other countries, including Philippine bananas, Vietnamese pitaya, New Zealand kiwi and Chilean cherries.
Three years ago, although Eladwy sensed the huge potential of the Chinese market, he and other Egyptian traders hesitated and dared not risk an investment due to their primitive understanding of the Chinese market and lack of trust.
Egyptian oranges have a thin peel, abundant juice, and unique taste. But due to the desert environment in which they grow, the peels look rough and the oranges vary in size, which may not be appealing in the Chinese market.
Due to the Chinese customs' strict criteria on fruit, initially only half of Eladwy's fruit could enter the country.
He then opened special farms with adapted growing techniques aimed at meeting the demand of the Chinese market in pesticide residue, appearance, sweetness and other aspects. They bought machines from France to pick the best fruit to be sold to China.
At the packing factory of the company in northern Cairo, this Global Times reporter saw the oranges being sterilized, washed, dried and selected through long production lines automatically in the clean workshops. After the process, the oranges all look golden and shiny. In the next step, substandard fruit will either be separated by a machine or workers. The remaining fruit will then be packed up and stored in cold temperatures waiting to be shipped.

At present, it takes 22 days for Egyptian oranges to arrive in China over the ocean. 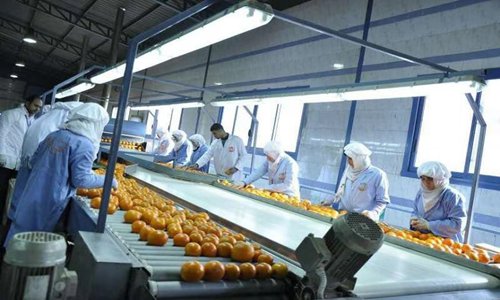 Land of promise
Eladwy visits China to carry out market surveys of oranges three times a year. Particularly, he comes to Beijing, Shanghai and Guangzhou where the fruit sells well.
"Now Egyptian oranges are popular among Chinese. Compared with American and Australian oranges, Egyptian oranges are more attractive in price and quality," Eladwy told the Global Times. With a growing export volume, the number of oranges exported from his company to China rose from 960 tons in 2016 to 9,600 tons this year.
In order to satisfy customers, the planting area of Eladwy's orchard is continuously extending. With the increasing demand, the number of his employees has grown 20 to 30 percent.
Moreover, the salary of a worker at a packing factory reaches $173, which is relatively well-paid in Egypt. A worker at a packing factory, Ahmed, told the Global Times he is lucky because his life has improved because of Chinese imports of Egyptian oranges.
According to the Horticultural Export Improvement Association of Egypt, the volume of Egyptian oranges exported to China was 24,000 tons in 2015. This number rose to 101,000 tons in 2017, valued at $80 million.
Golden opportunity
Orange exports are only a microcosm of the smooth trade between China and Egypt, as well as a vivid embodiment of the win-win cooperation under the BRI.
Eladwy is well aware that China is an open but highly competitive market. Several brands of Egyptian fresh oranges can be found on the e-commerce shopping platforms in China. Judging by consumers' comments, Egyptian oranges receive public praise.
"As long as the taste is good, China is not particularly concerned about the country of origin of the fruit. But we want to create a brand of orange that can be approved by Chinese consumers," said a trader, emphasizing the significance of brand awareness.
Talking about the first China International Import Expo, Eladwy told the Global Times, "It is a great platform for display and exchange, providing an excellent opportunity both for Egyptian products to enter China and Egyptian traders to develop a deeper understanding about the Chinese market."
Professor Abdel told the Global Times that there has been a trade deficit between China and Egypt for a long time, so the expo can meet both countries' demands. It is also a golden opportunity for Egypt to expand exports and balance bilateral trade.