The China International Import Expo concluded its second edition on Sunday with even more fruitful results than the first, showing China's resolution to further open up and inject long-term energy for more sustained development of the world economy, industry leaders said. 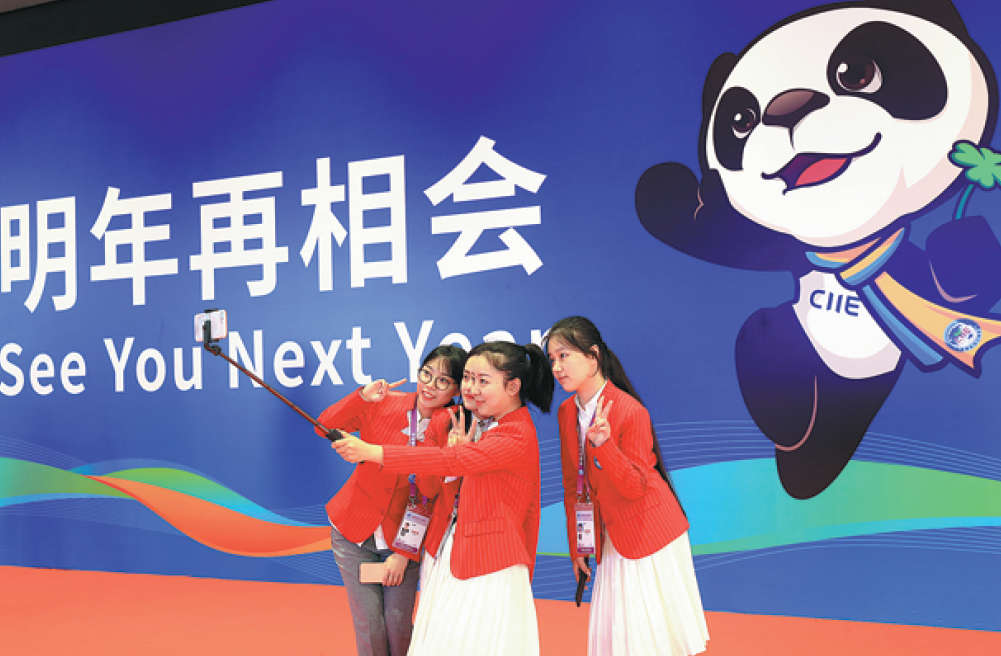 Volunteers take a selfie at the conclusion of the China International Import Expo in Shanghai on Sunday. (Photo: China Daily)

The value of deals emerging from the six-day event topped $71.13 billion, up 23 percent from the event in 2018. The CIIE bureau said on Sunday that at least 391 new products, technologies or services were released in this year's CIIE.

"As President Xi Jinping mentioned in the keynote speech at the opening ceremony, China is determined to advance opening-up by 'tearing down walls' and not erecting them. From a pure business standpoint, we support openness and free trade, as our company does 90 percent of its business outside its home country of Germany," said Maximilian Foerst, president of Zeiss Greater China.

"But it goes beyond pure business. When it comes to innovation, which is also a topic touched upon in President Xi's speech, there needs to be transfer of know-how and ideas between different areas."

Encouraged by this year's results, more than 230 companies signed up for next year's expo, including expanded exhibition areas. More than 80 applicants for the next CIIE are Fortune 500 companies and industry leaders, the CIIE bureau said.

The scale and effects of this year's CIIE have greatly exceeded expectations, said Joseph Romanelli, senior vice-president of MSD, a pharmaceutical and healthcare products provider, and president of MSD in China.

"President Xi said that 'despite the rocks and undercurrents, nothing will stop the momentum of the river'. Healthcare in China is very much like that river. The CIIE is not only important for MSD's future deployment in China, propelling us to introduce more innovative medicines, vaccines and services. The event's spillover effect can even impact the global medical industry," he said.

The largest provider of cosmetics for daily use that attended the two CIIEs, L'Oreal, confirmed that it will attend the third show as well. Fabrice Megarbane, the company's China CEO, said the Chinese market, which is increasingly opening up, will provide a lot of room for companies seeking development and innovation. Any company aspiring to go global should be deeply rooted in the Chinese market, he said.

HSBC also signed up for the next CIIE. Frank Fang, executive vice-president of HSBC Bank (China), said the number of financial opening-up policies announced during the recently concluded event — such as the removal of business restrictions for foreign banks operating in China — indicated that China has accelerated its reforms of the financial sector.