OVALLE, Chile, Aug. 27 (Xinhua) -- On Chile's windswept coast, a newly inaugurated China-funded wind farm, the first of its kind, is expected to supply clean energy equivalent to 130,000 homes per year. 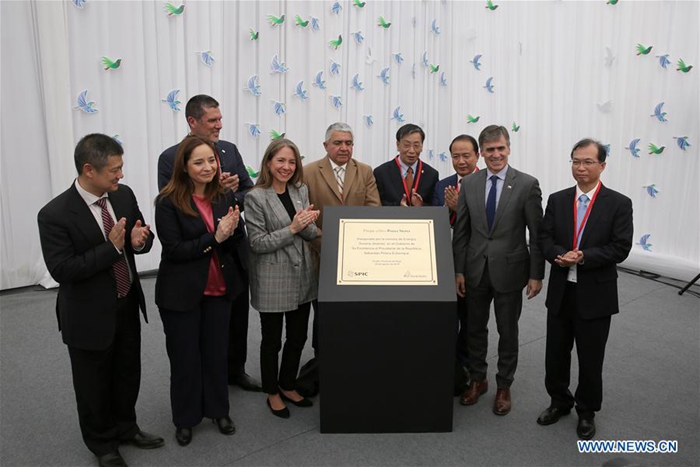 Since Chile in 2015 adopted the National Energy Policy 2050, the electricity sector has developed quickly, turning the South American country into "a world-class destination for solar and wind energy developers," according to the Paris-based International Energy Agency.

With its 32 turbines, the wind farm in the country's north-central Coquimbo region is capable of generating 282 GWh a year, helping cut carbon dioxide by at least dozens of thousands of tons.

"Long-term growth ... can only be sustainable with investment that prioritizes our environment, and this wind farm does that," said Economy Minister Jose Ramon Valente.

Punta Sierra is "a good platform for strengthening and speeding up development in Chile," Jiang Yi, vice president of SPIC, said.

SPIC has so far invested nearly $2 billion in Chile since 2016, becoming the largest private Chinese investor there, according to Jiang.

The wind farm is situated in Ovalle, a town some 320 km north of the capital Santiago, and is one of 34 clean-energy projects in different stages of development in Coquimbo.

"I want to thank the residents, because without your support, this plant won't operate well," Li Wuji, charge d'affaires at China's embassy in Santiago, said.

Li added that China has been Chile's leading trade partner for the past five years, and the real beneficiary of close bilateral ties is "the average person."