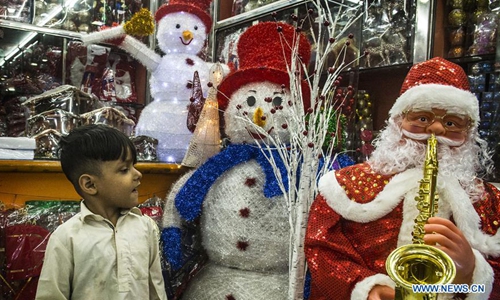 A boy looks at Christmas decorations at a roadside market in Kolkata, India, Dec. 20, 2019. (Photo: Xinhua)

India's trade deficit with China was 391.7 billion yuan ($56.8 billion) in 2019, an official from China's General Administration of Customs (GAC) said at a press briefing on Tuesday, adding it is significant that the two countries strengthen cooperation. The deficit accounted for about 60 percent of India's total bilateral trade.

"Both China and India are important emerging economies. Strengthening exchanges and cooperation is of great significance for both countries and will promote global progress and prosperity," Huang said at the briefing, which was held at China's State Council Information Office.

"We believe that deepening economic and trade cooperation between the two countries will help promote the sound, stable and balanced development of China-India trade," he added.