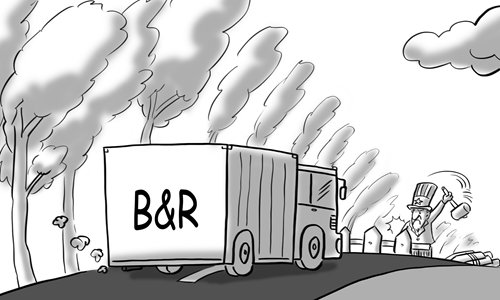 The Indo-Pacific strategy proposed by US President Donald Trump during his maiden trip to Asia in November received positive responses from Japan, India and Australia and drew wide global attention. It is designed to maintain US clout in the Indo-Pacific region and is likely to exert profound influence on the security of China's surroundings.The motive behind the strategy is to prevent the China-proposed Belt and Road initiative from extending to the Indian Ocean. Washington deemed the initiative has geopolitical intentions to increase China's strategic strength in Eurasia through improving the connectivity among the countries along the route. This will affect the US sphere of influence and strategic interests in Eurasia. Therefore, the Indo-Pacific strategy is a strategic adjustment by the US to tackle such pressure and challenges.The historical disputes and conflicts of interest between China and India provide an opportune point for US strategic adjustment. India is a key pawn in the Indo-Pacific strategy. The Trump administration hopes India would ramp up efforts to restrain China's strategic maritime channels in the Indian Ocean and hence destroy China's strategic foothold there. The essence of the Indo-Pacific strategy lies in the US' intention to act as an agent to avert head-on confrontation with China. The Trump government is committed to reviving the US economy, instead of confronting China and pursuing various air-sea battle concepts as in the Barack Obama administration's rebalance to the Asia-Pacific. The new strategy aims to counterbalance China through building a new mechanism with the joint efforts of US allies and security partners in the Indo-Pacific region, such as Japan, India, Australia and some ASEAN member states. In this regard, the US can not only reduce the risk of confronting China, but also reach the goal of checking China.As the rebalance to the Asia-Pacific strategy has almost collapsed, the Trump administration must release a new one. The US military had planned to deploy 60 percent of its naval and air forces, and 60 percent of its Pacific fleet in the Asia-Pacific region by 2020. However, the US has failed to encircle China that has seen burgeoning military growth. The Indo-Pacific strategy is likely to drive up security risks in China's maritime strategic channels and trade routes. About 90 percent of its foreign trade is through sea transportation and 75 percent of imported oil is shipped to the South China Sea via the Indian Ocean and the Strait of Malacca. In the long run, the Indian Ocean and the Strait of Malacca will still be an important maritime lifeline for China. Currently, the US has seven base clusters in the Indian Ocean and the Asia-Pacific region, accounting for nearly 50 percent of its 587 sites overseas. Once the Indo-Pacific strategy is implemented, Washington and New Delhi will lift the status and role of military bases and facilities in the Indian Ocean and consequently add security risks to China in the waters. In addition, the Indo-Pacific strategy will pose a threat to the hard-won stability of the South China Sea. The situation there remains basically stable due to the joint efforts of China and ASEAN countries. However, some countries outside the region, though claiming to have no stance over the South China Sea dispute, seek a dominant role by integrating Japan's Go South policy and India's Act East policy. Therefore, the strategy will complicate the South China Sea issue.The Indo-Pacific strategy will also hamper the Belt and Road initiative in that it causes countries along the routes to take a wait-and-see attitude, drives a wedge between China and Indian Ocean countries, and dampens their confidence about contact with China. It is likely that some route countries are sandwiched between China and other major countries like India and the US. This will definitely cast a shadow over the implementation of the initiative.Against this backdrop, we need to observe the situation and keep focused. After all, the Indo-Pacific strategy is proposed from a different background from that of the rebalancing strategy. China stands at a new starting point where it exhibits great wisdom and insight in safeguarding its security environment and long-term interests.Aside from developing ties with major powers, we should also maintain good relations with traditional friendly countries and small states along the Belt and Road. Besides, we should firmly safeguard the security of our maritime strategic channels and sea lanes.The US should realize that despite the Indo-Pacific strategy, it is unlikely to get what it failed to obtain with the rebalance to the Asia-Pacific. Only non-conflict, non-confrontation, mutual respect and win-win cooperation can head toward a new model of major-country relationship.