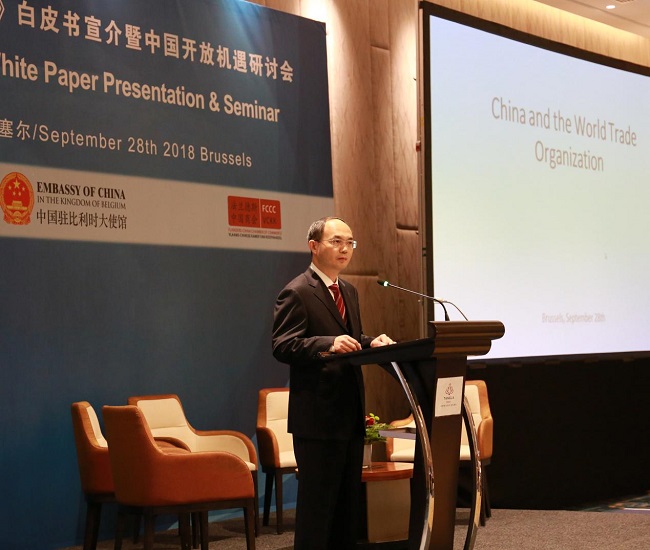 BRUSSELS, Oct. 15 (Xinhua) -- An all-round partnership of friendship and cooperation between China and Belgium has brought tangible benefits to the two peoples, Chinese Ambassador to Belgium Cao Zhongming has said.

At the invitation of Belgian Prime Minister Charles Michel, Chinese Premier Li Keqiang will pay a working visit to Belgium this week.

This is the third visit to Belgium by the Chinese premier in four years and the fourth consecutive year the heads of government of the two countries have met.

Since the establishment of diplomatic ties 47 years ago, the two countries have treated each other as equals and political mutual trust has continued to deepen over time, Cao said in a recent interview with Xinhua.

In 2017, bilateral trade reached 23.3 billion U.S. dollars, 1,150 times that of the early days of their diplomatic relations.

"The investment by Chinese companies in Belgium has become a prominent highlight of China-Belgium economic and trade relations in recent years," said the ambassador.

He took the Volvo factory in Ghent as an example, which has taken on a new life since it was acquired by the Chinese car manufacturer Geely, thus leading to a considerable increase in its production levels.

The spread of the China-proposed Belt and Road Initiative has allowed the Port of Antwerp to benefit and expand its international platform since cargo to and from China continues to grow, Cao noted.

"On the railway front, Sino-European trains are now connecting Daqing and Zeebrugge Port, as well as Tangshan and Antwerp," he said, adding that China's First 20,000 TEU Containership COSCO SHIPPING ARIES has visited the Port of Antwerp several times.

China-Belgium comprehensive and multi-level scientific and technological cooperation is on the rise, which has become the latest bright spot in ties.

Since 1979, China and Belgium have signed more than 70 technology-related cooperation agreements and implemented 470 intergovernmental science and technology cooperation projects.

"As Belgian microelectronics research is leading the world, many Chinese companies such as SMIC, Datang Telecom, Huawei and ZTE have signed cooperation agreements with Interuniversity microelectronics center (IMEC) and Leuven University," Cao said.

Meanwhile, China and Belgium have already started cooperating in areas where Belgium is strong such as the nuclear industry, aerospace technology, biomedicine, clean technology and resource recovery.

When talking about people-to-people exchanges, Cao said that Belgium is home to one of the fastest growing number of Chinese tourists.

At the same time, more than 400 Belgian students have applied for a study visa in China this year and nearly 4,000 Chinese students study at major universities in Belgium.

"Under the personal care of the leaders of the two countries, China-Belgium all-round partnership of friendship and cooperation will surely bear fruit in the golden autumn season and bring more wonderful things to the two peoples," the ambassador concluded.