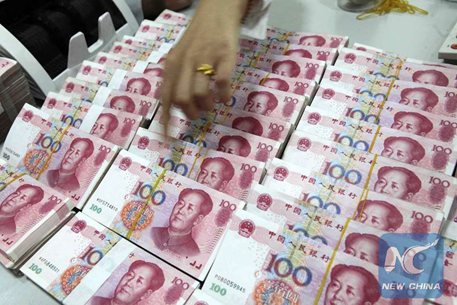 The Bundesbank's decision to hold some currency reserves in Chinese yuan is part of a long-term strategy, and the investment will be effected as long as the preparations have been completed, the German central bank told Xinhua in a recent interview.

"The Executive Board's decision to invest in Chinese renminbi going forward was taken in the summer of 2017," the Bundesbank said in an email to Xinhua.

"Once the requisite organisational and technical preparations have been completed, the investment in renminbi will be effected," it added.

The central bank also stated that the decision to include the yuan is part of a long-term strategy and reflects the increased importance of the Chinese currency in the global financial system.

As of January 2018, the Bundesbank's foreign exchange reserves were about 31.2 billion euros, of which nearly 80 percent were securities assets, and at the moment the reserves are invested not only in US dollar and yen, but also in Australian dollar since 2012, according to the German central bank.

As most central banks' reserves are held in dollars, any shift into other currencies, such as the yuan, will come at the expense of the greenback.

"The reason to use dollar reserves to invest in yuan was mainly motivated by the fact the CNY is primarily quoted against the US dollar, which simplifies the process of convertibility and minimizes the transaction costs to build the small CNY portfolio," the European Central Bank told Xinhua.

Last June, the ECB announced that it had exchanged 500 million euros worth of US dollar reserves into yuan securities.

The HSH Nordbank AG analyst Marius Schad believed that the IMF's decision to include the Yuan within its basket of reserve currencies in 2015 triggered this reshuffling of forex reserves. The world's central banks seriously take the IMF basket into account when allocating their reserves. Major shifts by the IMF will be accompanied by portfolio changes in time.

"Unsurprisingly, both the ECB's and Bundesbank's decision have been primarily affected by the IMF recognition," Marius told Xinhua, "But this is not the whole story. The inclusion of the Yuan by major central banks reflects both China's leading role within the world economy and the Yuan's rising role within the world's currency system."

However,he said that the shift towards yuan assets has to be seen as more symbolic than an economic necessity. Presently, only about 1 percent of the ECB's forex reserves are held in yuan, according the data from the ECB.

Many experts believe that the Belt and Road Initiative will boost a more widespread use of the yuan in the countries which China invested in and traded with.

The role of a reserve currency is significant with respect to funding, financing and investing, said the analyst.

He concluded that the more the yuan would be used in international finance and trade, the more likely it would become a reserve currency.