BAGHDAD, May 23 (Xinhua) -- The Iraqi Oil Ministry on Wednesday signed a contract with a Chinese company to develop the Eastern Baghdad oil field. 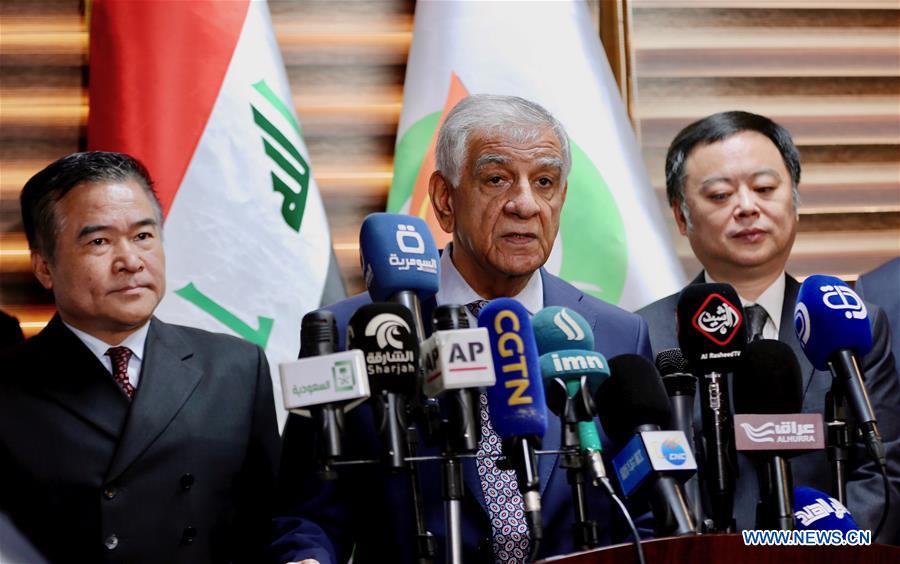 Iraqi Minister of Oil Jabbar Luaiby (C) speaks during a press conference after the contract signing ceremony in Baghdad, Iraq, May 23, 2018. (Photo: Xinhua)

"The signing of the contract with China's ZhenHua oil company, has an economic importance to the capital Baghdad, as it is the first oil project in Baghdad province," Iraqi Minister of Oil Jabbar Luaiby told a press conference after the signing ceremony.

Iraqi Oil Ministry's spokesman Asim Jihad said the contract to develop the southern part of Eastern Baghdad oil field would increase oil production at the field to nearly 40,000 barrels per day (bpd) within the next five years, and will provide crude oil for the Iraqi refineries, power stations and factories.

Iraq wants to increase its crude oil production to over 5 million bpd from about 4.35 million bpd at present, it added.

Iraqi economy relies heavily on oil for over 90 percent of its revenues. Early in 2017, Luaiby said that Iraq's proven oil reserves had increased to 153 billion barrels from the previously estimated 143.1 billion barrels.