This year is the 40th anniversary of the China-Japan Treaty of Peace and Friendship. To mark the occasion, China's Premier Li Keqiang and Japan's Prime Minister Shinzo Abe exchanged congratulatory messages on August 12 in which they expressed the desire to develop a long-term, healthy, and stable relationship between the two countries. This follows the publishing of an article written by Premier Li in the Asahi Shimbun newspaper in May, called "Let the Cause of Peace and Friendship between China and Japan Set Sail Again." In it, he wrote "China and Japan are important neighbors. There are dozens of direct flights between Beijing and Tokyo each day, and it takes just a little over three hours to fly between the two cities. We have walked a long way in recent years towards improving and developing China-Japan ties."

The new era of economic and trade cooperation between the two neighbors began with the normalization of diplomatic relations four decades ago. For Japanese companies, China was a suitable base for low-cost manufacturing; for China, Japanese companies were a valuable source of capital, equipment, and technology. It wasn't long before Japan became China's largest trading partner, a position Japan would hold for the next quarter-century. According to data from Japan's Ministry of Economy, Trade, and Industry, in 1990 there were 160 Japanese companies operating on the Chinese mainland; by 2001, the number had soared to 1,600 companies. 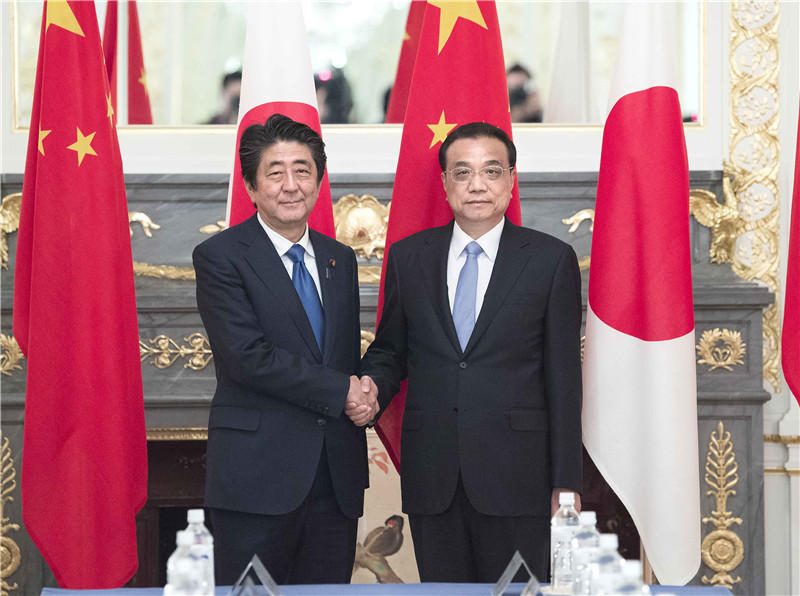 In 2007, the scale of the trade in goods reached 27.9 trillion yen ($252 billion), and China surpassed the US for the first time to become Japan's largest trading partner. Japanese companies had realized that China was no longer just the world's biggest factory – it was also the world's most populous and promising consumer market. Forward-thinking Japanese companies have adjusted their business strategies in order to launch goods and services targeted at Chinese consumers.

After more than 40 years of China-Japan relations, the two countries have an inseparable economic relationship. China has been Japan's largest trading partner since 2007. In 2017, Japan's exports of goods to China reached a record high, reaching 14.89 trillion yen, an increase of nearly 69 percent from 2005. More than half of the frozen food Japan imported last year came from China, including some of the most treasured foods in Japanese cuisine. The Japanese have the habit of eating eels and rice in the summer, believing that it nourishes and strengthens the body. Recently, Japanese media reported that domestic eels had become too expensive for consumers, and that many Japanese chain restaurants were using eels imported from China. Some people joked that if it wasn't for Chinese eels, people in Japan might not be able to afford eel rice boxes. This is a clear sign that Japan's supermarkets and catering companies see the label "Product of China" as being synonymous with high quality and low price.

And the economic bonds between the two countries extend not just to products, but also to the growing number of people-to-people exchanges. In the first half of this year alone, more than four million trips were made by Chinese tourists to Japan, making China the country's largest source of foreign tourists.

Looking to the future, economic and trade ties between China and Japan should be strengthened in recognition of the high degree of mutual dependency. High value-added products have gradually occupied a dominant position in China's goods exported to Japan, with a survey conducted by the Japan External Trade Organization in March noting that the list of Japan's main imports from China includes products like smartphones and touch-screen terminals. At the same time, the steady development of China's economy has brought about huge business opportunities for Japanese companies, such as those in the country's auto industry. For nine years, China has been home to the world's largest market for automobiles. In 2008, Japan's automakers occupied about 17 percent of China's massive market, making sales of 4.83 million vehicles. Japanese car companies are now tailoring their strategies towards meeting the goals of China's government when it comes to energy conservation and environmental protection. This is reflected in the announcement by Toyota, one of the world's top 10 automakers (and Japan's largest), that it will only produce electric vehicles in China from 2020.

The future is looking bright when it comes to opportunities for cooperation between the two countries. China can offer Japan its knowledge as a world leader in areas such as artificial intelligence and digital finance products. And Japan has rich experience in chip manufacturing and aged care services that would help China as it starts writing the next chapter of its industrial development.

But more important than the contribution made by any single product or technology, the leaders of China and Japan have promised to work together towards the realization of regional and global prosperity and stability. This spirit of cooperation can be seen in the negotiations for the China-Japan-South Korea Free Trade Agreement, and the decision to partner in projects under the umbrella of the Belt and Road Initiative and the Asian Infrastructure Investment Bank. As long as the two countries continue working towards mutually beneficial goals, they will make new contributions to the prosperity and stability of Asia, and the peaceful development of the wider world.