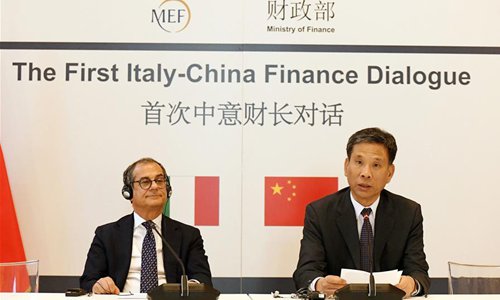 Italy and China held a round of high-level financial talks on Wednesday, pledging to deepen their cooperation in the finance sector, and restating support for multilateral trade.
Italian Minister of Economy and Finance Giovanni Tria and Chinese Finance Minister Liu Kun co-chaired the "First Italy-China Finance Dialogue", months after the signing in Rome of a Memorandum of Understanding (MoU) on the Belt and Road Initiative.
The event was preceded by a financial forum involving key public and private stakeholders from both countries, with different panels of experts addressing topics ranging from world macroeconomics to global finance, from banking and insurance to investment.
"Both sides reaffirm their commitment to deepen and broaden bilateral economic and financial relations," the two ministers said in a joint declaration after the dialogue.
Both countries also welcome financial institutions from the other side "to enter their securities, insurance, wealth management including custody services, and futures markets, in line with the regulatory framework currently or prospectively in force," they added.
In his opening address, Tria said trade between Italy and China has been following a constant upward trend in recent years.
"Italian sales to China grew from about 9 billion euros (10.1 billion U.S. dollars) in 2010 to 13.2 billion euros in 2018, while our imports from China settled at about 30 billion euros," he said.
"There is still a wide room for improvement, which ought to be explored," he stressed.
Data from the Italian Finance Ministry and European Union (EU) statistical office Eurostat showed that trade between Italy and China exceeded 43 billion euros in 2018.
Italy was China's fourth largest supplier from Europe in 2018, while China was the ninth destination market for Italian exports at global level, and the most important one in Asia.
In the joint declaration, the two sides also explained that Italy would "welcome China's commitments to open-up the financial sector and its implementation of related measures, including allowing foreign business to own up to 51 percent of shares in securities, futures and life insurance joint ventures."
On its part, China would "welcome Italy's participation in the opening-up process of its financial market."
Three different memorandums of understanding were inked at the closure of the event - Italy's private banking group Unicredit and export insurance agency SACE each signed a deal with the Export-Import Bank of China, while Italy's insurance regulator INVASS signed a third one with the China Banking and Insurance Regulatory Commission (CBIRC).
In the joint declaration, the two sides also agreed on "the first Panda Bond to be issued by a qualified Italian financial institution."
Such "Panda bonds" would be issued by Italian authority in order to co-finance branches or subsidiaries of Italian firms with offices in China, according to information unveiled by Italy's state lender Cassa Depositi e Prestiti (CDP) in late March.
Italy's CDP is owned by the Economy and Finance Ministry, with a stake of about 83 percent.
Finally, both countries' finance ministers pledged "to uphold the rules-based international economic system, to support multilateralism in the multilateral trade system with the WTO (World Trade Organization) at its core, and to foster participation in the reform of the global economic governance with a view of promoting high-quality, strong, sustainable, balanced, and inclusive growth."