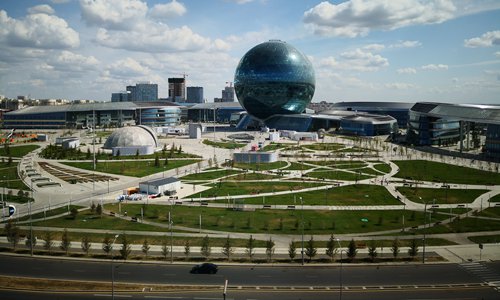 Kazakhstan businesses seek to benefit from Belt and Road Initiative to tap potential of massive Chinese market
Well-developed transportation routes means being a landlocked country no longer an obstacle to doing business with China and other countries
BRI should lead to greater cultural ties between two countries in addition to technical and business cooperation, says Kazakhstan MP
Central Asian wine may not be well known to Chinese customers, but that isn't stopping Arba Wine, one of the biggest wine makers in Kazakhstan, from selling its products to China this year for the first time.
This year's volume to China is only 20,000 bottles, which are expected to reach Shanghai before October. But while proudly showing the company's huge cellar stacked with barrels and brewing machines, the company's owner Zeinulla Kakimzhanov vowed to increase that number to 200,000 bottles in five years.
He is not worried about competition with prominent European and "New World" breweries, as he believes the Chinese market is large enough to accommodate a variety of enterprises.
"There are 200 million 'rich' people in China who will want to consume wine, more than European and US (wine consumers) combined!" Kakimzhanov told the Global Times at his brewery near Almaty, the largest city in Kazakhstan.
Currently, his wine is transported by truck, crossing the border into Xinjiang in Northwest China and traveling to Shanghai on the east coast in five days.
Arba Wine's bright prospects are just one of numerous success stories involving Kazakh enterprises doing business with China. The consumer market is booming, and particularly importantly, well-developed land and air transport routes between the two countries make cross-border cargo delivery very convenient, helping Kazakhs tap the huge potential of the Chinese market.
Transport routes are vital for enterprises in Kazakhstan, the world's largest land-locked country. They have given the country an increasingly important role in international transport and communications, partly thanks to its willingness to embrace the Belt and Road Initiative.
Situated at the heart of Eurasia and bridging the vibrant economies in East Asia and Europe, infrastructure construction and transportation projects in Kazakhstan have steadily improved connectivity both within and outside the country.
Chinese President Xi Jinping in September 2013 first raised the concept of a "Silk Road Economic Belt" at a speech in Nazarbayev University during his visit to Kazakhstan. The Silk Road Economic Belt, together with the later proposed "21st Century Maritime Silk Road," became China's flagship Belt and Road Initiative, which was aimed at boosting international connectivity of infrastructure for cargo and personnel exchanges.
More than 2,000 years ago, Chinese products, mainly silk, were transported from the ancient capital Chang'an westward via Gansu and Xinjiang to what is now Kazakhstan and all the way to Europe at its furthest. The ancient trade route included the southern part of Kazakhstan. 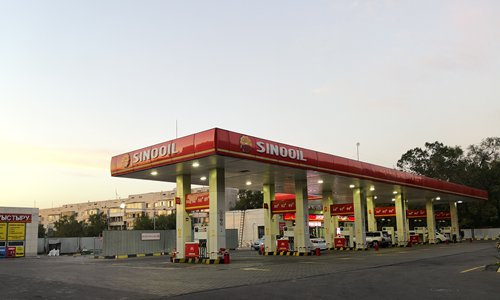 Cooperation in all areas
A tour to the Central Asian country reveals that it has been proceeding with cooperation projects with China under the initiative.
Walking around the Kazakh cities of Almaty and Shymkent, it's easy to spot gas stations of China-invested SinoOil, as well as advertisement boards promoting Huawei and Oppo phones at major tourist spots and airports. One of China's biggest lenders, the Industrial and Commercial Bank of China, also has a strong presence in Almaty, the largest city by population and old capital of Kazakhstan.
A major highway connecting the cities and tourist attractions in the south of the country was conveniently called "New Silk Road" by the local people.
Officials with the Kazakh government told the Global Times that cooperation under the Belt and Road Initiative was progressing well in general.
"The promising cooperation areas include construction, automobile and railroads. We have the West China-West Europe railway (cutting through), which is focused on cargo transportation, tourism, and the logistics potential of our country. We've already seen positive steps and positive achievements in this area based on contributions by China and Kazakhstan," Kazakhstan's Vice Minister of Culture and Sport Erlan Kozhagapanov told the Global Times.
One of the most notable projects in the capital Nur-Sultan is a light rail train system, which is already half finished and will link the international airport and the city's major function areas, including the 2017 World Expo site, Nazarbayev University and the House of Ministries.
The project is being built with loans provided by China Development Bank, and was contracted to Chinese construction firms. The project had been suspended for a few months, until Nur-Sultan Mayor Altai Kulginov recently announced a plan to cut investment by $350 million to $1.45 billion, due to delayed funding in Kazakhstan. City officials expect the light rail system to address the city's growing traffic problems, and environmental and passenger safety issues, the Astana Times reported. Construction work is expected to be resumed soon, and hundreds of piers for the elevated tracks have already been finished.
Darkhan Mynbai, a member of the Kazakhstan parliament, told the Global Times, "We need cooperation in all areas, not only in technical, but also in spiritual areas. It will help us consolidate this new relationship in trade and other areas as well," he said. That's how the two countries will develop as good neighbors, and the idea of the New Silk Road should be proposed to cover culture and new technologies, Mynbai told the Global Times.
"We must pass this New Silk Road to our younger generations and make it useful for our children to keep developing relations between our countries," he said, adding that the West China-West Europe railway will benefit the entire population of Kazakhstan.
In terms of how to improve the cooperation mechanism, Mynbai suggested that the two sides pay more attention to quality of cooperation, and that the two sides should also jointly produce movies and hold more sports events for better cultural exchanges.
"There is always room for improvement. We still need to learn from each other's culture. There is still lack of knowledge in this area." 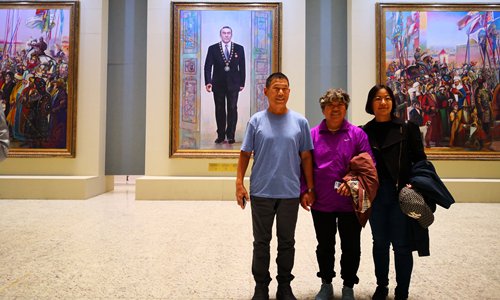 Chinese tourists pose for a photo in front of a portrait of former Kazakhstan President Nursultan Nazarbayev at the National Museum in Nur-Sultan on August 17. (Photo: Li Qian/GT)

Tourism potential
Kazakhstan also wants to woo more Chinese tourists, as the number of outbound Chinese tourists has been increasing rapidly.
According to Kazakhstan's Minister of Culture and Sport Aktoty Raimkulova, in 2018, more than 8.9 million foreigners visited Kazakhstan, of whom about 1 million came purely for sightseeing.
Every year, 200,000 Chinese visit Kazakhstan, of whom 130,000 come for tourism purposes.
The number of Chinese visitors to Kazakhstan is the second biggest after Russia and followed by India.
"Tourists from China are very important for us," said Vice Minister of Culture and Sport Kozhagapanov.
There are various kinds of places of interest that will attract Chinese visitors, local officials say. The country is home to vastly different terrains, from wind-corroded canyons to high-altitude ski resorts, and attracts different visitors with a variety of interests. At the national museum, Chinese tourists were seen taking photos in front of a giant portrait of Kazakhstan's first president Nursultan Nazarbayev. Furthermore, the closeness in culture between the two countries also makes many Chinese feel more at home when touring Kazakhstan. 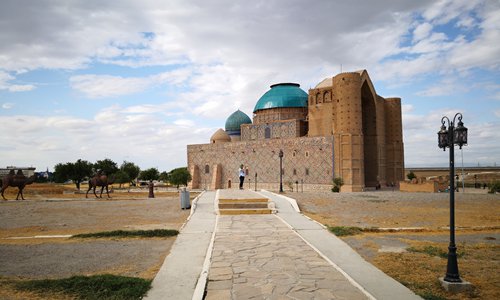 A visitor takes photos at the Mausoleum of Khoja Ahmed Yasawi in southern Kazakhstan on August 15. (Photo: Li Qian/GT)

Visitors from major Chinese cities will find a laid-back life experience in Kazakhstan, with fairly good services and competitive prices.
However, compared with the overall number of outbound Chinese tourists, who made 150 million overseas trips in 2018, those who visited Kazakhstan accounted for a very small number, showing that Kazakhstan is still not a major destination for them.
In order to attract more Chinese visitors, Kazakhstan in 2017 introduced a 72-hour non-visa entry for tourists who visit a third country and transit in Kazakhstan, for example, via airports in Nur-Sultan or Almaty.
The measure is good for short stays in Kazakhstan, and the country is planning to extend the period from 72 to 120 hours in the near future, Kozhagapanov told the Global Times.