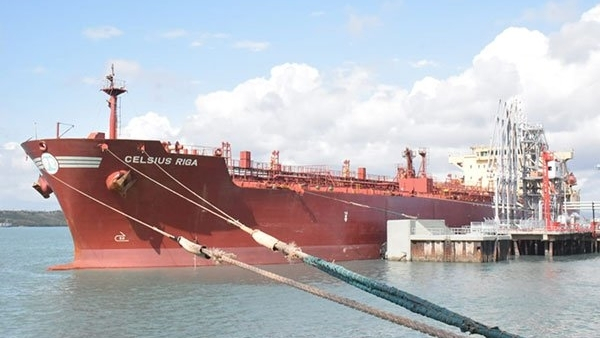 Celsius Riga, the vessel to ship Kenya’s crude oil at the port of Mombasa on August 26, 2019. (Photo: national media group)

President Uhuru Kenyatta has flagged off Kenya’s maiden crude oil export warning against corruption that may deny people the opportunity to benefit from the resource.The crude oil from Turkana Oil fields, which is being mined by Tullow Oil, is being exported to Malaysia.

A Chinese company, Chemchina, bought the first batch of the Kenyan crude oil at $12 million, which is approximately Ksh 1.2 billion.

“We are now an oil exporter. Our first deal was concluded with 200,000 barrels at a price of 12 million US dollars,” President Kenyatta said last month.

Speaking during the flag-off, President Kenyatta said the country with its partners will continue to pursue natural resources but without compromising the future generation. He said more resources would be channeled into upgrading infrastructure that would ease transport of oil from the fields to the port.

“The government will ensure that the local communities benefit from the oil and that the fruits of the resource are also shared in an equitable and sustainable manner,” he added. “I urge all those in charge to avoid any misuse of the resource that would deny others from its benefit,” he added.

The small-scale export is intended to test the international markets’ reception of Kenya’s low-sulphur oil ahead of commercial production, which is estimated to start in the second half of 2023.