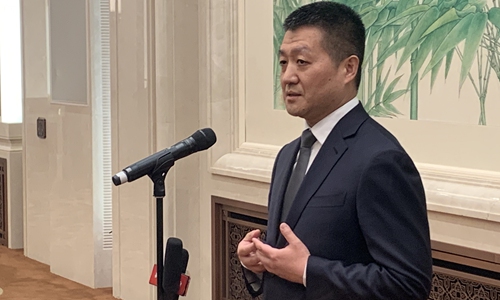 Kiribati President Taneti Mamau's official Beijing visit, the first of its kind since the island nation resumed diplomatic ties with China, yielded fruitful results. China will open its market further to Kiribati to products including seafood, Lu Kang, director-general of the North American and Oceanian Department of Ministry of Foreign Affairs, said at a press conference on Monday.
President Taneti Mamau was inspired to make the visit so soon after the two countries restored ties and Mamau said his visit was a milestone, according to Lu.
Mamau was deeply impressed by China's economic development after meeting with Chinese leaders and visiting companies, especially by the country's high-tech sector development, Lu also said.
Based on the one-China principle, Kiribati is willing to deepen strategic mutual trust and reciprocal ties and understands the great potential for bilateral cooperation, Lu noted.
China and Kiribati formally resumed diplomatic relations in September after the Pacific island state announced it would cut "diplomatic ties" with the island of Taiwan.
The two countries signed a Memorandum of Understanding (MOU) on the Belt and Road Initiative (BRI) in Beijing on Monday, which marks that China has signed BRI deals with all the 10 Pacific island countries that have diplomatic ties with China, according to the Xinhua News Agency.
Annual bilateral trade volume between China and Kiribati is roughly $19 million. The majority of the island's exports to China is seafood. As more agreements are reached and favorable tariff policies are implemented, China will open its market further and especially within the fishing industry.
Mamau is scheduled to visit East China's Zhejiang Province, Shanghai, and South China's Guangdong Province, Lu noted. The three southern coastal regions have been working with Kiribati in their agriculture and fishing industries, and will offer more opportunities for future cooperation, Lu said.
Since Kiribati made agriculture, shipping, and tourism part of its 20-year development plan in 2016, Beijing will encourage more Chinese citizens to visit the Pacific island nation, Lu noted, and added that to serve increased travel demand, Kiribati looks forward to developing its tourism infrastructure with China.