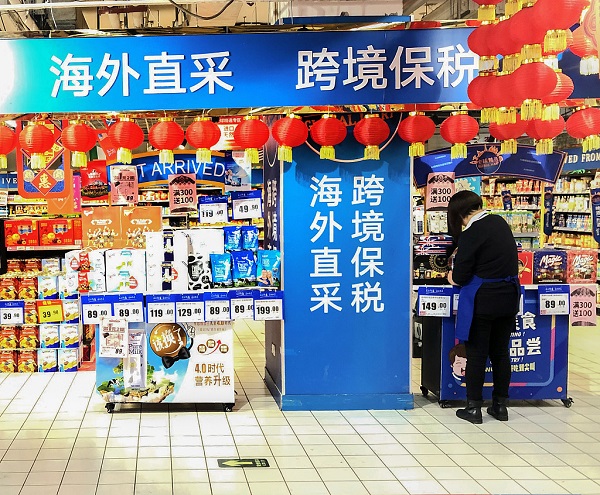 Cao said one year ago, fresh tropical foods were hardly available for people in Gansu given the difficulties in transportation, and residents often shied away from expensive imported fruits and seafood delivered by air and road transport.

Since last Spring Festival, the first test train along the land-sea trade route was launched, making direct road delivery possible between Gansu with the Qinzhou Port in southern China's Guangxi Autonomous Region after the ocean shipping from Southeastern Asian countries to Guangxi.

Now, food delivery services are carried out four times per month, according to the local railway sector.

As logistical costs have been greatly reduced, tropical delicacies have become commonplace at markets in Lanzhou and other cities in Gansu, and sold at much cheaper prices, Cao said.

The new trade route is a result of the Belt and Road Initiative, said Luo Jie, vice director of Lanzhou's international land port, adding that the rail transport relied on the Lanzhou-Chongqing line, a high-speed rail line going through some of the most complex mountain terrain in Western China.

"By the end of 2018, the city's land port has opened 35 international expresses with total cargo amount of over 30,000 tonnes," Luo said. "Northwestern China's major agricultural and industrial produce and products of onions, apples and aluminium rolls are also being exported to Southeast Asian countries."

Luo believes that trade between China's northwestern regions and Southeastern Asian countries will continue to boom in the years to come as the trade route helps meet the mutual demand.