Lao officials who attended the drilling-through ceremony pertaining to the first major tunnel along the China-Laos railway spoke highly of the project. 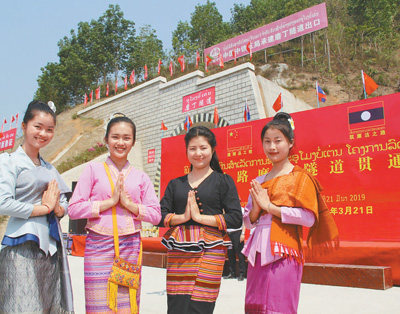 Lao girls pose for pictures at the drilling-through ceremony pertaining to the Boten Tunnel along the China-Laos railway in Boten, Laos. (Photo: People's Daily)

This marks an important milestone in the project’s construction process. For the Lao people, this is an important historical moment and has created a miracle in the history of Lao construction, said Khamsouk Bounyavong, Vice President of Lao People’s Revolutionary Party Central Committee’s Inspection Committee, who attended the drilling-through ceremony in Boten.

After the opening of the China-Laos railway, development between Laos and other ASEAN countries will also speed up and the railway will become a major transportation artery that runs through the north and south of Laos. It will also become a new engine for the modernization of Laos, Khamsouk added.

During a field inspection of the project, Lao Minister of Industry and Commerce as well as Chairperson of the Laos-China Joint Committee on Economic, Trade and Technical Cooperation Khemmani Pholsena also expressed her wishes for completion of the project at an early date, and for the Lao people to take trains to the world.

China Railway No. 5 Engineering Group (CREC-5) drilled through the Boten Tunnel, a tunnel with a total length of 6453.5 meters. The tunnel is among the 10 major tunnels longer than 5 km along the China-Laos railway.

The tunnel has to pass through unfavorable geology such as karst, bed rock, fault fracture zones, gypsum, carbon mudstone, and water inrush. The CREC-5, however, made the victorious breakthrough by tackling challenges.

The 414-km China-Laos railway is a strategic docking project between the China-proposed Belt and Road Initiative and Laos' strategy to convert from a landlocked country to a land-linked hub.

The railway runs from the Mohan-Boten border gate in northern Laos to the capital of Vientiane. At present, it takes 13 hours to drive from Vientiane to Boten, but less than 4 hours to take the high-speed train after completion of the project.

Commenced in December of 2016, the project is scheduled to be completed and opened to traffic in December 2021.