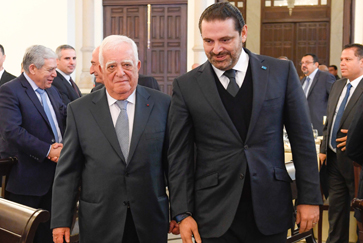 HE Prime Minister. Saad Hariri honored the former President of the Lebanese Economic Organizations and Chairman of Fransabank Group HE Adnan Kassar (L), during a ceremony in January 2018, (Photo: Agencies)

BEIRUT, Oct. 29 (Xinhua) -- Adnan Kassar, chairman of Fransabank Group, established in 1921 as one of the oldest banks in Lebanon, is considered a major contributor to the signing of the first trade agreement between Lebanon and China in 1955.

The trade accord was the result of Kassar's efforts to achieve the visit of a Chinese business delegation to Lebanon, as part of the preparation for the establishment of diplomatic relations between Lebanon and China in 1971.

The agreement was not the end of Kassar's work, but inspired him to do more to promote Chinese goods across the Arab world.

"I introduced the Chinese products and services to the Arab world and China has now grown into a world power with an enormous domestic market," Kassar told Xinhua in an exclusive interview.

This fast-growing China has motivated Kassar to expect more from the trade between the two countries.

"We think it's our mission now to introduce Lebanon to China. Its attractive investment environment, its role as a key hub on the Belt and Road Initiative, the opportune partnerships with Lebanese international companies, as well as its competitive products," he said.

The Belt and Road Initiative, proposed by China in 2013, refers to the Silk Road Economic Belt and the 21st Century Maritime Silk Road, which aim at building a trade and infrastructure network connecting Asia with Europe and Africa along the ancient trade routes of the Silk Road.

As the only Lebanese representative in the upcoming China International Import Expo, scheduled from Nov. 5 to 10 at the National Exhibition and Convention Center in Shanghai, Fransbank Group will take advantage of this opportunity to gain a market share in China.

"A Lebanese delegation, led by a Fransabank executive, will participate in this expo. They will not only introduce our banking services, but also promote products that Lebanon can offer to the Chinese market including wine and olive oil," Kassar said.

The bank chief also said he aims to promote Lebanon's tourism in China.

Notably, Fransabank, headquartered in Lebanon and present in more than nine countries including France, Algeria, the United Arab Emirates and Iraq, has not yet opened a branch in China, but according to Kassar, the bank does not rule this possibility.

"These countries cover key markets on the Belt and Road Initiative where Chinese companies are most active. We are working to serve these companies as well as the locals working with China," Kassar noted.

China is expected to import 10 trillion U.S. dollars' worth of goods and services in the next five years, according to China's Ministry of Commerce.

"Lebanon has a lot to offer for the the Belt and Road Initiative and also will benefit greatly from this visionary initiative ... Our country's plans for major infrastructure, energy, telecommunication, health and water projects will be greatly attractive for Chinese groups," Kassar explained.

"We are always eager to welcome Chinese groups to our country to invest, partner with Lebanese companies and set up their regional operations in our beautiful country," the Lebanese bank chief concluded.