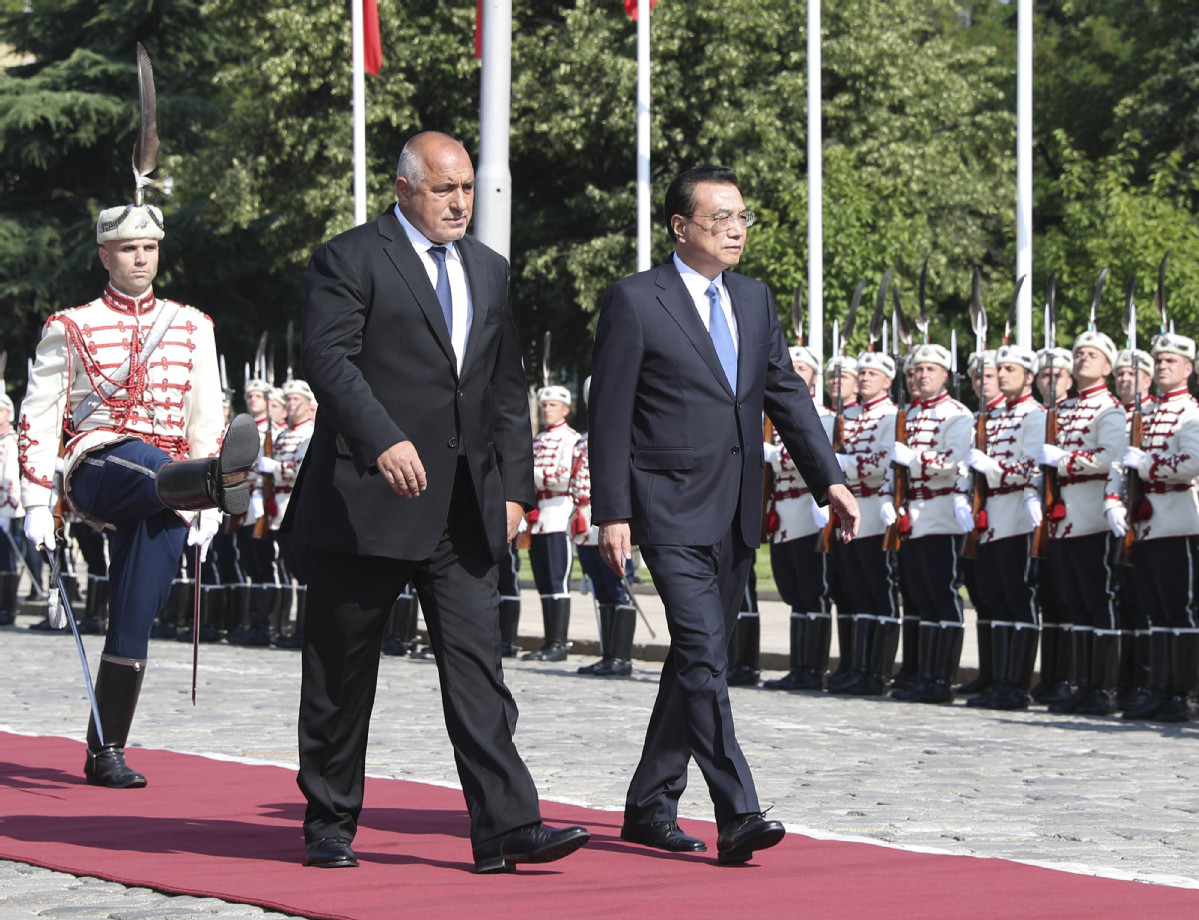 Premier Li Keqiang is accompanied by Bulgarian Prime Minister Boyko Borisov at a welcoming ceremony on Friday in Sofia. Li is making his first visit to Bulgaria and the first visit to the country by a Chinese premier in 18 years. Li was scheduled to attend the seventh Leaders' Meeting of China and the Central and Eastern European Countries on Saturday. [Photo by Ding Haitao/Xinhua]

No one will win a trade war, which will not only hurt enterprises from both sides but also the recovery of the world economy, Premier Li Keqiang said on Friday, hours after additional US tariffs on Chinese products kicked in and Beijing took immediate countermeasures.

Li made the remarks in Sofia, Bulgaria, while he and Bulgarian Prime Minister Boyko Borisov jointly met with the media.

When other countries take unilateral measures to levy additional tariffs on Chinese products, countermeasures will be taken to safeguard China's development interests as well as the authority and effectiveness of the World Trade Organization, Li said.

However, China will never take the initiative to incite trade disputes or start trade wars, he added.

If insistently pursued, a trade war will harm other countries and those who started it, Li said.

Despite external changes, China will firmly conduct reforms and opening-up and keep the Chinese economy stable and promising, Li added.

He is currently on his first visit to Bulgaria, the first by a Chinese premier in 18 years.

On Friday, Premier Li and Prime Minister Borisov witnessed the signing of about 10 agreements to boost cooperation on the Belt and Road Initiative as well as in such fields as agriculture, civil nuclear energy and digital economy.

In meeting with Borisov, Li said China would like to work with Bulgaria, one of the Central and Eastern European nations, to bring ties to a new high, using the opportunity of the 70th anniversary of the establishment of China-Bulgaria diplomatic ties next year.

Li said both countries should accelerate the alignment of their own development strategies and strengthen cooperation in various areas, including the Belt and Road, infrastructure, nuclear energy and industrial parks.

The premier called for expanding trade and investment to promote trade liberalization and facilitate investment. He said both countries should strengthen exchanges at all levels and support each other on issues of core interest and major concerns.

Li was scheduled to attend the seventh Leaders' Meeting of China and the Central and Eastern European Countries, also known as the "16+1"mechanism, on Saturday.

The premier told Borisov that China and Bulgaria should deepen and expand agricultural cooperation, including the "16+1" agricultural demonstration park.

Li said China-CEEC cooperation is a vital part and a helpful supplement of China-Europe relations. China firmly supports European integration and wants to see a united, stable and developing Europe, and will continue to work with European countries, including Bulgaria, to boost the "16+1"mechanism, he said.

Borisov said Bulgaria was one of the first to establish diplomatic ties with New China and will work with the world's second-largest economy to improve its infrastructure. The "16+1" mechanism is a platform based on market rules, instead of a geopolitical one, aiming for mutually beneficial cooperation, he said.