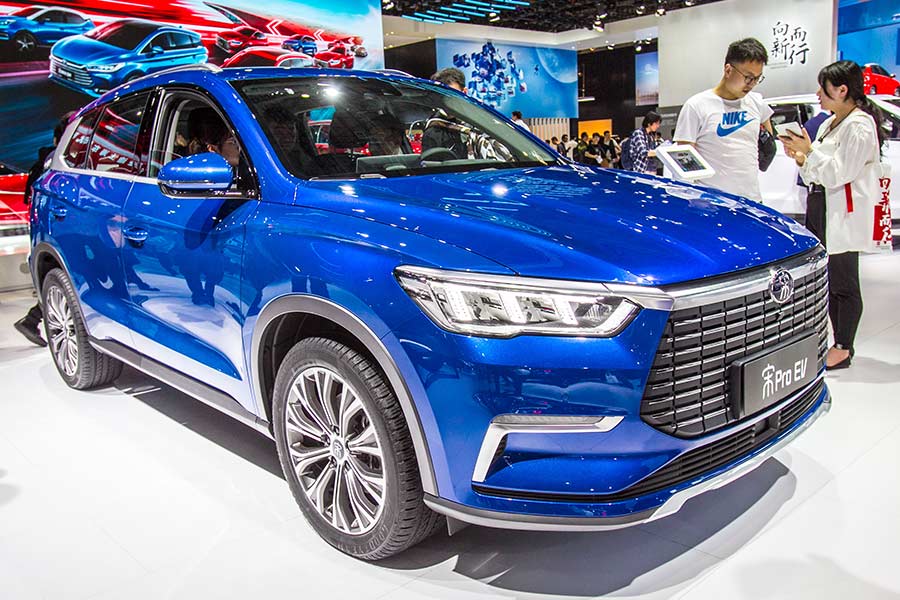 Visitors check technical details of cars on display at an expo in Shanghai. (Photo: China Daily)

China is calling on local authorities to relax restrictions on car purchases, which would help unleash the potential of the world's largest auto market, according to analysts.

Local governments that have placed curbs on vehicle sales should explore gradually relaxing or removing them if conditions permit, said the State Council, China's cabinet, in a statement on Tuesday.

It also asked them to offer support to new energy vehicle purchases and facilitate trade in used vehicles among different regions.

Stock prices of carmakers listed in China's A-share and H-share markets including Brilliance Auto and Great Wall Motors rose on the news on Wednesday as the Chinese auto market saw sales fall for a 13th consecutive month in July.

Eight major cities, including Beijing, and Hainan province have placed curbs on car purchases in an effort to ease traffic congestion and cut emissions.

Cui Dongshu, secretary-general of the China Passenger Car Association, said the move will be of great help to the auto market, which is a pillar of China's economy, if it is well implemented.

"If local governments effectively implement the measure and gradually ease or even remove the curb, they will help stimulate the market a great deal," said Cui.

Authorities in Guangzhou and Shenzhen, both in South China's Guangdong province, have increased their license plate quotas, but other cities like Beijing or Shanghai have not followed the suit so far.

In Beijing, more than 3.3 million people are counting on their luck to get one of the 38,000 gasoline car license plates allocated annually.

Xu Haidong, a deputy secretary-general of the China Association of Automobile Manufacturers, urged local governments to come up with new measures.

"If you make a close examination of the potential customers, you will find that those who want to buy cars and can afford them are residents living in cities where license plates are rationed," said Xu.

The CAAM estimates that overall sales in China this year could fall by 5 percent to 26.68 million units from 2018, which saw the first fall since 1990 in the country.

Patrick Yuan, an analyst at investment firm Jefferies Hong Kong, said the results of the State Council's measures would depend on how they are implemented at the provincial and city levels.

He expected the market to rebound in 2020, saying that residents' desire to purchase will gradually recover and some of China's measures including tax cuts have increased people's disposable incomes.

Yuan said most car dealers' inventory level had also returned to a reasonable level after the de-stocking efforts started earlier this year.

The CADA said the State Council's call for efforts to facilitate trade in used vehicles across the country will help stimulate new car sales, because if people sell used cars they will buy new vehicles.

In the first half of the year, used vehicle sales totaled 6.86 million, up 3.93 percent year-on-year, according to the CADA.

Luo Lei, deputy secretary-general of the association, said one of China's biggest advantages in terms of used vehicles is the abundant supply.

"Each year, we have around 20 million more secondhand vehicles," Luo said at an used vehicle forum in July. He expected used vehicles sales this year to reach 15 million from 12.4 million in 2018.