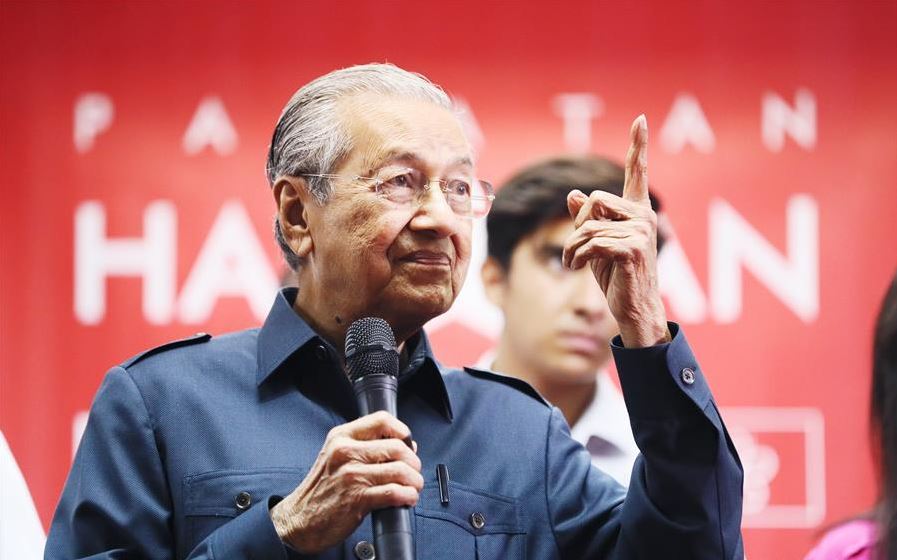 Malaysian Prime Minister Mahathir Mohamad's forthcoming visit to China will further enhance bilateral ties and help step up pragmatic cooperation between the two countries, Chinese observers said on Wednesday. At the invitation of Chinese Premier Li Keqiang, the 93-year-old Malaysian leader will make an official visit to China from Friday to Tuesday, Chinese Foreign Ministry spokesperson Lu Kang announced on Monday. Shortly before his trip to China, the Malaysian leader said in an interview with the Associated Press (AP) that the Southeast Asian country is seeking to cancel multibillion dollar infrastructure projects involving Chinese firms."We don't think we need those two projects. We don't think they are viable. So if we can, we would like to just drop the projects," he said from his office in Putrajaya, AP reported. If scrapping the projects altogether isn't doable, Malaysia will need to at least put them on hold, Mahathir said."It is safe to say that Kuala Lumpur still holds high expectations and attaches great importance to these projects under the China-proposed Belt and Road initiative, given that negotiations based on mutual respect over the issue have been non-stop," Luo Yongkun, an assistant research fellow at the China Institutes of Contemporary International Relations, told the Global Times.The Malaysian leader's visit shows the two sides have agreed to manage disagreements on the projects through talks and to make sure the negotiations will not affect bilateral ties, Luo noted. The Mahathir-led government, which took office in May, has ordered the suspension of projects worth $22 billion involving Chinese companies, with Mahathir stressing the decision was made based on economic grounds.Earlier this month, Mahathir met with Chinese State Councilor and Foreign Minister Wang Yi to discuss the former's visit to China.  At that meeting, the Malaysian leader called for closer ties with China, reiterating his support for the Belt and Road initiative.An increasingly stronger China means more and bigger opportunities for Malaysia, Mahathir said, adding he expects to develop closer ties with China. Mahathir is expected to first visit the East-China city of Hangzhou to meet e-commerce giant Alibaba's chief Jack Ma Yun before flying to Beijing, Reuters reported. China-Malaysia pragmatic cooperation encompasses the suspended infrastructure projects, said Zhou Fangye, associate research fellow at the Chinese Academy of Social Sciences' National Institute of International Strategy. Aside from traditional cooperation in the infrastructure sector, Malaysia also hopes to follow China's rapid development in other high-end fields, such as  e-commerce, artificial intelligence and big data, to upgrade its industry and enhance its innovation capability, Zhou told the Global Times on Wednesday. Such a shift would not only cement trade between the two countries, but also stimulate two-way investments in a wider range of areas, including finance, agriculture, science and technology, Luo said. No to stationed warshipsThe AP report said Mahathir also called for respecting the free movement of ships in the South China Sea, adding that no warships should be based there."We are all for ships - even warships - passing through, but not stationed there," Mahathir said, adding that this includes US vessels. "It is a warning to everyone. Don't create tensions unnecessarily."A consensus on South China Sea issues outweighs disagreements between the two countries, and Mahathir's comments do not target China, Zhou said. China and Malaysia put great emphases on regional security and stability, and oppose meddling by any non-regional country. The two sides would likely strike deals during Mahathir's trip on further cooperation in the South China Sea, Luo said.The two sides will explore a higher level of maritime cooperation, including joint naval exercises and the building of ports to enhance maritime inter-connectivity, Luo predicted. China and the Association of Southeast Asian Nations agreed on a draft text of the Code of Conduct in the South China Sea during the China-ASEAN foreign ministers' meeting in Singapore earlier this month.