Some 57 percent of quiz takers know the name of the railroad China built for Kenya that boosted the local transportation and economy, according to an online quiz co-conducted by people.cn and the Global Times Public Opinion Center. 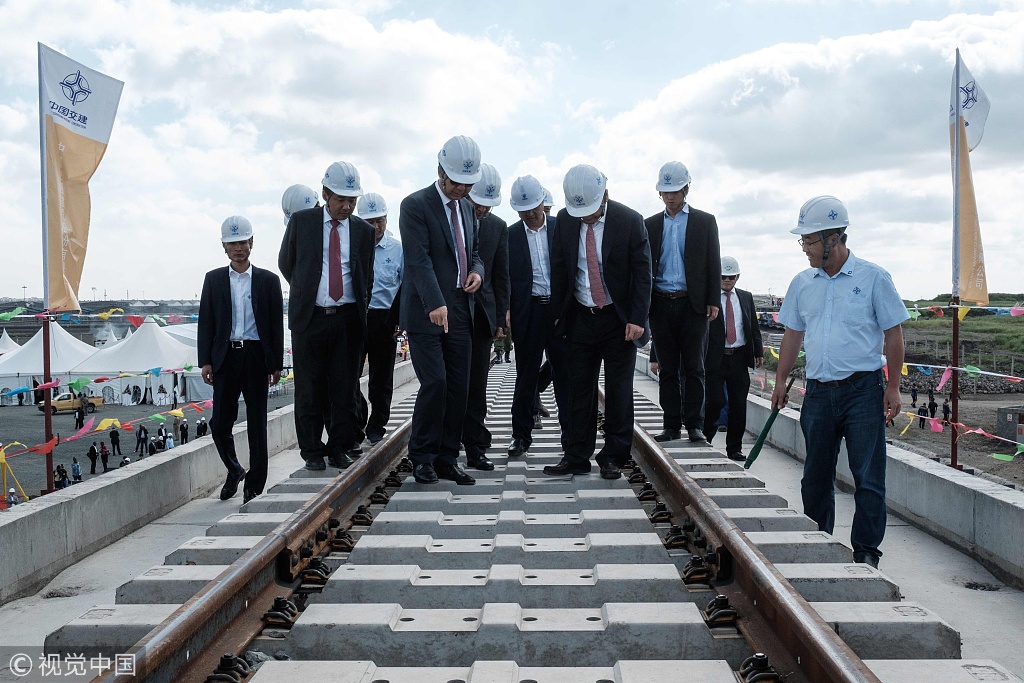 Members of the Project contractor China Communication Construction Company (CCCC) visit a track of Standard Gauge Railway (SGR) before the Presidential Inspection of the SGR Nairobi-Naivasha Phase 2A project in Nairobi, Kenya, on June 23, 2018. (Photos: VCG)

Some 4,100 overseas followers of the Twitter account of People's Daily participated in the survey and answered three questions.
The railroad connecting Nairobi, the country's capital, and Mombasa, the largest port in East Africa, started operations on May 11, 2017. Dwarfing the single 100-year-old narrow-gauge railway in capacity and safety, the railway reduces logistical costs by at least 40 percent.
Since the start of its construction, the railway has driven Kenya's GDP growth by about 1.5 percent a year and created 46,000 direct or indirect jobs. China has cultivated 1,600 railway professional technicians in Kenya, and over 100 Kenyan students are now majoring in railway studies at Chinese universities.
"People's recognition of the railway proves our Belt and Road initiative has been successfully conveyed to the overseas audience," said Chen Yiming, director of the People's Daily Social Media Compilation Center.
"They are familiar and happy with our key projects in the Belt and Road initiative which benefits the local economy," Chen said.
The question most people tried to answer was, "What animal did African ambassadors in the 15th century bring to China, and was identified as a qilin, a unicorn with a deer's body and a cow's tail and a symbol of peace and stability?"  Thirty percent got the right answer: giraffe.
The last question was about a "square-hole round cash coin" that circulated throughout China since the Qin Dynasty (221BC - 206BC). One coin of this shape, believed to belong to the Yongle reign of the Ming Dynasty (1368-1644), was discovered in Kenya. Yongle coins have been found in waters off Dongsha and Xisha islands and areas surrounding the Indian Ocean.

Cover photo: The construction site of Standard Gauge Railway (SGR) during the Presidential Inspection of the SGR Nairobi-Naivasha Phase 2A project in Nairobi, Kenya on June 23, 2018.