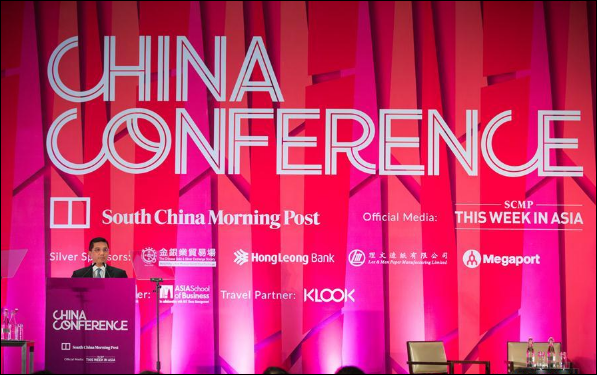 Malaysian Economic Affairs Minister Mohamed Azmin Ali delivers the closing remarks at the China Conference organized by the South China Morning Post in Kuala Lumpur, Malaysia, Oct. 11, 2018. Malaysia is looking toward to tapping into new opportunities from its long-standing relationship with China, the rise of which has benefited the Southeast Asian country tremendously, Mohamed Azmin Ali said Thursday. (Photo: Xinhua)

Malaysia is looking toward to tapping into new opportunities from its long-standing relationship with China, the rise of which has benefited the Southeast Asian country tremendously, a senior official said Thursday.

Malaysia expects China "to provide global leadership" not just in the economic sphere but in soft power, he told the audience.

Azmin noted that relations between the two countries go back several centuries, when China traded with Malacca for years in peace, unlike the western powers which came to colonize the region.

"The bilateral relationship between China and Malaysia, therefore, must be seen from the prism of that long history, signified not by wars or colonization, but by robust trade and cultural exchanges," he said.

The two-day China Conference brought together business, academic and political leaders to discuss cooperation between China and Southeast Asia on politics, economy, technology and how to tap opportunities of the Belt and Road Initiative, among others.

China's rapid growth had been a boon for Malaysia with China now being its largest trade partner, said Azmin. "Over the past 30 years, Malaysia has benefitted tremendously from the rise and integration of China into the global economy."

He mentioned the robust trade with China of palm oil, which has been particularly important for Malaysia, a major global exporter, given the "double standard" taken by the West against the commodities.

As Malaysia is keen on promoting its products to China, Azmin also urged Malaysian companies to continue to explore all possibilities to tap the opportunities.

"Furthermore, from corporate giants like the Alibaba Group to drone manufacturer DJI to SMEs, there are many opportunities for Malaysian firms to form joint ventures and strategic alliances with Chinese corporate players," he said.

Meanwhile, Azmin also urged Chinese businesses to view Malaysia through the prism of hope and opportunity, following the establishment of new government since the general election in May.

He reiterated that Malaysia would like to learn from China and to see more investment from China that would bring capital, technology, value creation, jobs and skills transfer for Malaysians.