The groundbreaking for an expressway linking Phnom Penh and Sihanoukville has been confirmed for March, according to the Khmer Times. 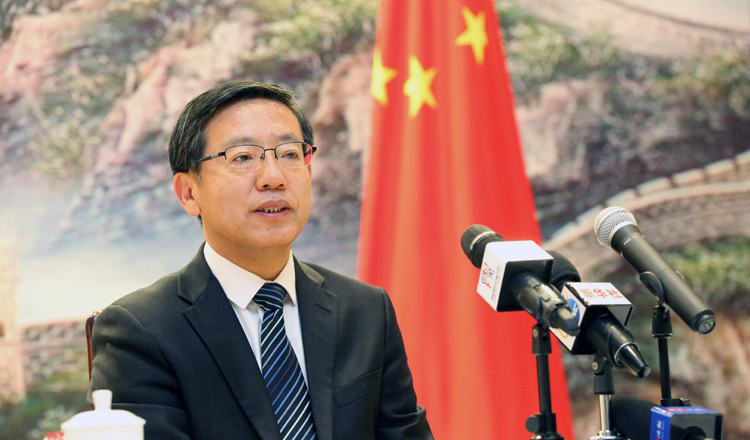 During a press conference on Friday, Wang Wentian, the Chinese Ambassador to Cambodia, said the project will be built with assistance from the Chinese government as it is part of China's Belt and Road Initiative (BRI).

"Construction will start in March as originally planned," Mr Wang said, adding that the project was of great importance because "it will connect the country's capital to the deep-sea port in Preah Sihanouk."

A construction team composed of 200 workers from China arrived in Cambodia earlier this month to work on the project.

Transport Minister Sun Chanthol said recently that $100-million worth of construction materials will be imported into Cambodia before the end of January to build the expressway.

He said the only issue that still needs to be solved is compensation to those affected by construction work. According to ministry spokesman Va Simsorya, about $150 to $200 million will be used for compensation, with the funds coming from the Cambodian and the Chinese government.

The expressway project will be built on a build-operate-transfer basis by state-owned Chinese Communication Construction Company Ltd.

With construction costs estimated at $1.9 billion, the expressway will stretch over 190 kilometres – shorter than the current road, which runs for 240 km. It will have four lanes for the majority of its run and will take four years to complete.

The first of its kind in the Kingdom, the expressway will alleviate traffic from National Road 4, the busiest thoroughfare in the country, which connects the capital to Sihanoukville's deep-sea port, the main gateway for exports and imports.

Sin Chanthy, president of the Cambodia Freight Forwarders Association, said, "We've been waiting for this expressway for a long time because National Road 4 has too much traffic.

"The number of vehicles in the road keeps increasing every year, but the road is not expanding, so we need a new road badly," Mr Chanthy said. "The new expressway will enhance efficiency in the transportation of goods."

During an official visit to China last week, Prime Minister Hun Sen called on Chinese companies to consider investing in an expressway connecting the Cambodian capital and Bavet city, in the border with Vietnam.

A feasibility study on such a project was recently conducted by the Japanese International Cooperation Agency (JICA), showing that $3 billion will be needed to complete it.

On Friday, the Chinese Ambassador also announced that the passenger terminal of Siem Reap's new international airport will be finished before the end of the year.

"In 2019, we will make a lot of progress in this development," the ambassador said.

"In the first half of the year, we will build some basic infrastructure and before the end of 2019 we will finish the passenger terminal," Mr Wang said.

"I believe the new airport will play a key role in developing the tourism sector in Cambodia," the ambassador said, adding that the new airfield is expected to handle 7 million passengers per year.

The new airport, which is expected to cost close to $1 billion, is being built on a 750-hectare property in Sotr Nikom district on the outskirts of Siem Reap. The project is expected to be completed in two to three years.

China's state-run Yunnan Investment Holdings Ltd is in charge of the project. The Chinese firm has exclusive right to run and manage the airport concession for 55 years under a build-operate-transfer (BOT) scheme.

According to the company, work to prepare the site – including clearing, compacting and levelling the ground – has already been going on for months.