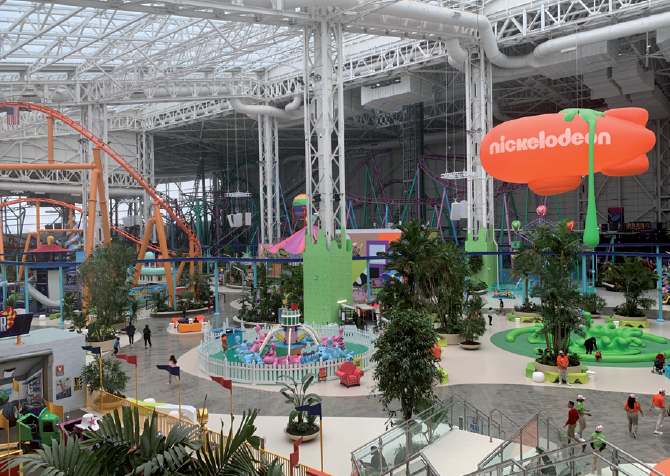 The Nickelodeon Universe at the American Dream mall in New Jersey. The most expensive mall ever built in the US will open in stages until 2021. BELINDA ROBINSON / CHINA DAILY

The gleaming American Dream mall is a true feat of engineering, with its sparkling white marble floors, colorful interior, record-breaking amenities and shops. Its mission? Bring back the US mall shopper after a mass exodus to online shopping.

The 3 million-square-foot mall in East Rutherford, New Jersey, about 14 miles west of Manhattan, has cost $5.7 billion to build to date. It ranks as the most expensive mall ever built in the US. It's so big, it will open in stages until 2021.

But its debut comes as 8,600 retail shops across the US closed this year. And, out of the 1,200 enclosed malls in America, only a third are doing well, according to National Public Radio.

Mall vacancies were at a seven-year high of 9.1 percent in the third quarter of 2018, close to the peak reached in 2011, according to The Wall Street Journal.

The first enclosed mall was built in Edina, Minnesota, in 1956. After that, shopping centers became a crucial part of American life for decades. But their demise has accelerated in the age of online shopping.

In 2018, consumers spent $513.61 billion online, according to the US Department of Commerce. In contrast, staple mall department stores like Sears, J.C. Penney and Macy's closed 80, 27 and four stores respectively this year.

Mary Gilly, a professor of marketing at the University of California Paul Merage School, told China Daily that shopping centers must adapt or die.

"Shopping centers will doubtless look different [in the future] than they do now, but I don't think anyone has figured out what that will be. They are still experimenting with events, restaurants and attractions to compete with the ease and availability of online shopping," Gilly said.

David Smiley, assistant director of urban design at Columbia University, told China Daily: "The big new malls in the US are shifting to become 'experience' destinations, not just shopping. The Mall of America in Minneapolis and the American Dream in New Jersey (and a similar one in Florida) all have parks and amusements to draw people in."

American Dream hopes to buck the trend by going super-size on entertainment. The site, built on swampland, took nearly 20 years to build because of funding problems and even lawsuits from the NFL. It's next door to the Meadowlands Sports Complex, which includes MetLife Stadium, home to the New York Giants and New York Jets.

The mall's host of attractions include 450 shops (most of which will open in March 2020) and the "Nickelodeon Universe", the biggest enclosed amusement park in the Western Hemisphere. To get in, visitors must buy either an all-access pass for $49.99 or general access admission for $39.99, under 2's go free. The prices are set to rise in November.

"So far, I think it's awesome," Susan Romano, who lives in New Jersey, 15 minutes away from the mall, told China Daily. "We took our granddaughter here today. She loves it. There's a lot for her to do. But the only thing is it's overpriced. It's $49 for us to get in — that's too much."

American Dream has a massive NHL-size professional ice rink, roller coaster and rides, along with a 160-foot indoor ski hill, ranked as the largest in the Western Hemisphere.

Jeanette Ledda, a mother of two from New Jersey, told China Daily: "It's pretty incredible, but I wish they'd done incentives for local residents because it's pricey. I've got two kids, so that's over 30 bucks each for three of us to get into Nickelodeon, and the water park is a separate price, so it's not cheap."

The mall's 'DreamWorks Water Park' is the largest indoor water park in North America. Set over 1.5 acres, it uses 1.5 million gallons of water and features a wave pool and 35 slides. But the attractions don't stop there.

The 90-acre site will allow customers to shop until they drop in luxury outlets like Saks Fifth Avenue, Hermes, and Tiffany & Co. Budget European retailer Primark will have a store and so too will US mall staples Sephora and lingerie brand Victoria's Secret. Asian supermarket chain H Mart is also on board.

American Dream is expected to draw people from surrounding areas, as it is just 20 minutes by bus from New York City ($18 for a round trip). Many children who visited the mall with their parents were visibly excited, jumping up and down with delight and shouting "Wow!"

The mall officially opened on Oct 25, but much of it is still a construction site. The places still under construction are a hotel, convention center, Legoland Discovery Center and the Sea Life Aquarium, which will open in the spring. A miniature golf course will allow keen golfers to tackle 18 holes. There will also be a place called "KidZania", where children can play in the fuselage of a Boeing 737, when it's built in 2021.

Other amenities will be a giant observation wheel with views of the Manhattan skyline, which is visible from that part of New Jersey. There will be an indoor garden, a performing arts theater, and luxury movie theater with 1,400 seats, 12 screens and 4D cinema.

A member of the staff, who did not want to be identified, said there had already been 2,500 visitors on the opening weekend, and he expected hoards more.

The ambitious project is the brainchild of Canada's Triple Five Group, which owns other ventures, including the Mall of America in Bloomington, Minnesota — the largest indoor mall in the country. That mall gets 42 million visitors a year and generates $2 billion in economic activity for Minnesota, the company said.

The developers hope to get $2,000 a square foot at American Dream in sales and could generate income of $309 million annually from the attractions, consulting firm HR&A Advisors said.

The mall is aiming for $2.6 billion in gross sales by its third year and hopes to attract 40 million visitors per year.

"When you walk through, we want you to be awed, jaw-dropped, inspired," Triple Five President Don Ghermezian told The Wall Street Journal. He believes in the project so much that he mortgaged nearly half his company's stakes in two of his largest assets — Mall of America and the West Edmonton mall in Canada.