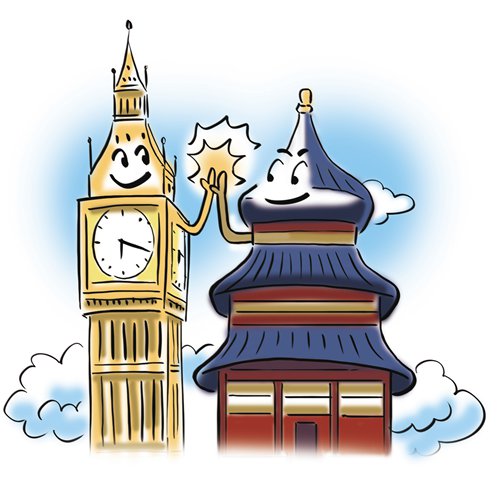 British Prime Minister Theresa May is to visit China this week. The trip of the Conservative leader is crucial because the building of a "Global Britain," a vision laid out by May, has entered a new stage and socialism with Chinese characteristics has crossed the threshold into a new era.

Britain has shown its pioneering strategic vision in developing relations with China. Former prime minister David Cameron declared Britain will act as China's strongest advocate in the West when he was in office. Britain was the first Western power to apply to join the Asian Infrastructure Investment Bank (AIIB) despite opposition from the US and other allies.

China-Britain bilateral relations have ushered in a golden era and gained early results. Cameron's efforts are based on pragmatic consideration for dealing with the economic downturn in the UK as well as strategic judgment on the changing world pattern. While Chinese President Xi Jinping met Cameron in Beijing recently, Xi said he appreciated the former British leader's foresight and efforts in promoting the development of relations during his tenure as British prime minister.

After May came to office, ties have been lukewarm. May's official visit to China has been repeatedly delayed for several reasons. The prime minister herself is cautious as there are no leading figures like George Osborne in her cabinet to develop ties with China. The snap general election in which Conservatives lost their majority made May's position unstable.

Besides, Brexit negotiations between the UK and the EU have had twists and turns and involved a great deal of attention from May. Moreover, Britain focuses on the negotiation of free trade agreements (FTA) with the US, Australia, Canada and Japan when readjusting its foreign relations, while China is not on its priority list.

Nonetheless, in the post-Brexit era, China is indispensable for Britain's foreign relations. It is hoped May will take a bigger step to promote the breakthrough in bilateral relations.

May once said Britain will be a "global champion of free trade" in the post-Brexit era. Xi said at the World Economic Forum in Davos last year that China "must remain committed to developing global free trade and investment." China and Britain have similar positions and shared interests in fighting trade protectionism.

In view of rising global protectionism, China and Britain can use the platforms such as the UN, WTO and G20 to unswervingly safeguard the multilateral trade system and further promote trade liberalization and investment.

The UK can also take the lead in promoting cooperation under the Belt and Road initiative, in which the British government has become increasingly active.

Recently, it signed an agreement with the AIIB to contribute $50 million to the bank's project preparation special fund. The May government could make more efforts to build more visible and tangible cooperation projects under the framework of the Belt and Road initiative.

Britain can also act as the frontrunner to promote negotiations for the China-Britain FTA. China has shown greater interest in negotiating the FTA with Britain though London was hesitant due to multiple reasons. In fact, Britain can be bolder to announce the launch of the FTA pre-negotiation. After all, what a frontrunner can gain is different from that of a follower. The UK has been advised to first plan a road map and then study the feasibility to lay the foundation for formal negotiations.

The 19th Communist Party of China National Congress has drawn a new blueprint for the future development of China and provided new opportunities to all countries in the world to deepen cooperation with China. May is expected to seize the chance to promote bilateral relations to harvest more fruits in the golden era.