BRI NEWS Merkel on a delicate mission to China

Merkel on a delicate mission to China 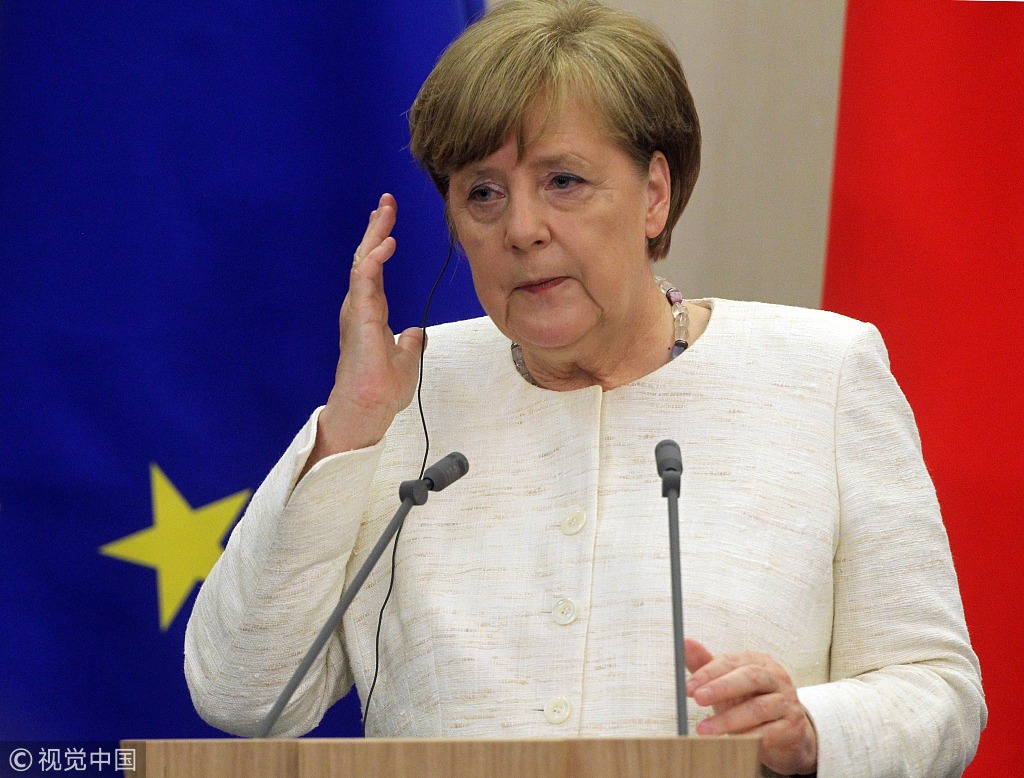 German Chancellor Angela Merkel will pay a two-day visit to China on Thursday in an attempt to boost Germany- and EU-China relations amid a highly volatile and uncertain international climate. The main reason for this volatility is the uncertainty created by US President Donald Trump, whether in trade disputes with China and the European Union, or his rash decision to pull the United States out of the Iran nuclear deal. This latest Trump move has angered Europeans and follows his withdrawal from the Paris climate change agreement and relocation of the US embassy in Israel from Tel Aviv to Jerusalem. Transatlantic relations are facing difficult times.

While there is a temporary truce between Beijing and Washington on trade matters, Germany and the EU remain in the firing line with Trump continuing to rail against German car exports to the US and the threat of 25 percent tariffs on steel and aluminium still hanging in the air.

Against this background, Merkel will seek to make common cause where possible with President Xi Jinping and at the same time point out some growing problems. On paper, Germany, the EU and China are strong supporters of the multilateral system, including the World Trade Organization and the United Nations — but only up to a point. Beijing and Brussels have both engaged in direct trade talks with Washington rather than use the WTO. China, meanwhile is taking the EU to the WTO court over the bloc’s failure to grant China market economy status. The EU is working with the US, and Japan, to press China to reduce its steel output. It is a messy situation.

Merkel also arrives in China as a wounded leader, having taken six months to cobble together another coalition with the social democrats after she suffered major losses to the populist parties at the elections last October. Merkel’s coalition partners have also seen changes in leadership. The Socialist Democratic Party (or SPD) has maintained the foreign ministry under Heiko Maas but also taken the powerful finance ministry with Olaf Scholz as minister. Both politicians have argued for a tougher approach to China reflecting growing concerns in Germany about China’s economic expansion into Europe.

There were many critical comments following Chinese attempts to buy stakes in leading German companies such as Daimler and Deutsche Bank as well as the electricity grid. This followed the controversial Kuka and Aixtron deals. The German government thus became a strong advocate for new EU trade defense laws (just approved) and also pushed for a screening mechanism to examine Chinese investment in Europe (currently before the European Parliament).

Although Merkel has to reflect this growing public concern, she will also seek opportunities to develop closer ties, whether through Germany’s engagement in the Belt and Road Initiative or cooperation in ensuring the Paris climate change agreement is upheld. Both sides are ready to expand cooperation in green technology.

On the foreign policy front, Merkel and Xi have both spoken in favour of maintaining the Iran nuclear deal and the denuclearization of the Korean Peninsula. With the summit between Trump and Democratic People’s Republic of Korea leader Kim Jong-un less than three weeks away, Merkel will be keen to hear Xi’s assessment of the prospects.

Merkel’s visit should also help prepare the annual EU-China summit due to be held in Beijing in mid-July. Although negotiations for a bilateral investment treaty are proceeding at a glacial pace, there is progress in several other areas including cooperation in the management of oceans. If Merkel can ensure that Germany-China relations remain on an even keel, it will also be a boost to EU-China relations.

(The author is director of the EU-Asia Centre in Brussels.)