Minister of Commerce briefs media on 'comprehensive opening up'

The National People's Congress (NPC) is holding a press conference Sunday featuring the Minister of Commerce Zhong Shan, Vice Minister and Deputy China International Trade Representative Wang Shouwen, and Vice Minister Qian Keming who will take questions from reporters on “creating a new landscape in comprehensive opening up and promoting the high quality development of business and commerce” at Beijing's Great Hall of the People. 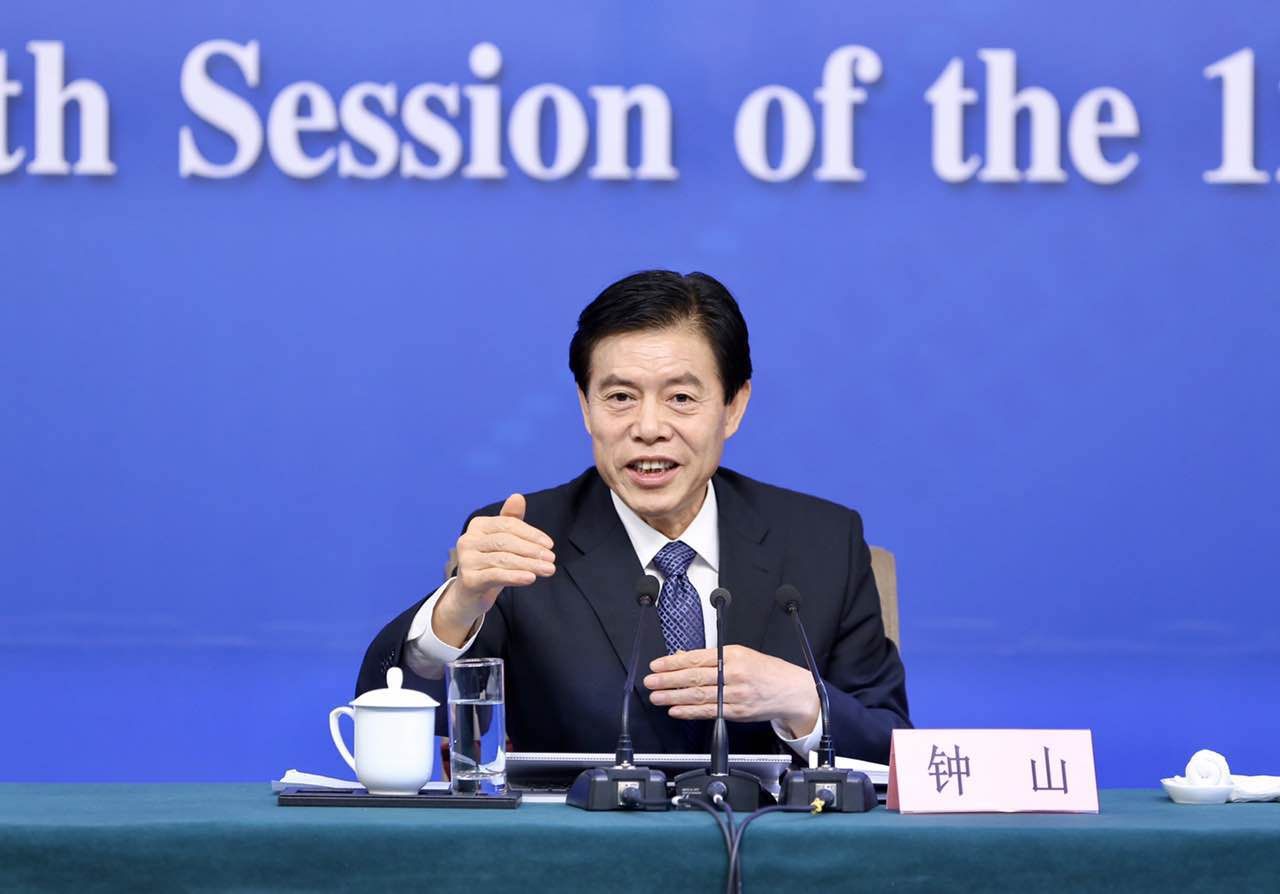 It is necessary for China to insist on innovation and high-quality development to become a strong power in economy and trade, said Zhong Shan, Minister of Commerce at the press conference, adding that China’s consumption, foreign trade, foreign capital and investment abroad are already among the top in the world.

Zhong also mentioned the overall idea and specific measures to develop a high-quality economy and trade, including “one goal, six missions and eight action plans.”

China to demonstrate a commitment to globalization with CIIE

China plans to further a new round of high-level opening-up and prove its belief in shared prosperity via the China International Import Expo (CIIE) a few months away, Zhong said, noting preparations are underway.

The event reaffirms China’s unequivocal commitment to inclusive globalization in the wake of the challenged multilateral trading system and the growing investment protectionism, Zhong said.

Showcases China’s confidence and determination of opening up, CIIE offers an open platform for international cooperation, where 60 countries have signed up to present their national images, and enterprises from over 120 countries and regions will exhibit their commodities and services, Zhong said.

During the expo, a Hongqiao International Trade Forum will be held with an estimated 4,500 participants. According to Zhong, politicians, leaders of international organizations, well-known entrepreneurs and think tanks from the industrial and academic sectors are expected to deliver speeches.

"China welcomes Japan's participation in the Belt and Road Initiative and hopes to further the cooperation within its framework together with Japan,” Zhong said.

"Having noticing that Japan has been paying close attention to the relevant topics for the Belt and Road Initiative cooperation, I am going to meet Japanese Trade Minister Hiroshige Seko,” Zhong revealed his plan at the conference.

According to Zhong, China’s ‘Belt & Road’ Initiative has been positively echoed by over 140 countries and regions, and fruitful achievements were yielded through the cooperation under its framework. “First, the trading scope is enlarging. Second, investment areas are broadening. China has altogether invested over 60 billion USD to other countries in various sectors such as agriculture and manufacturing. Third, major projects are promoted with great effort, with over 27 billion USD invested. Several railways and port projects, as well as economic and trade cooperation zones (ETCZ) were built.”

China is a major player in consumption with the sales volume ranking 2nd globally. Consumption has been the NO.1 driving force of economic growth for the last four consecutive years, according to the commerce minister.

Among the 1.4 billion population, 0.4 billion are in the middle-income group. As people's income steadily improves, China has a huge potential of consumption to tap, said Zhong.

Besides, the foreign consumption volumes of Chinese citizens add up to about 200 billion USD, among which there are both high-grade goods and daily consumer goods.

Zhong added that the high amount of foreign consumption is partly due to the lack of affordable high-quality in China. Domestic consumption in household services, elderly care, education and medical services is also a weakness.