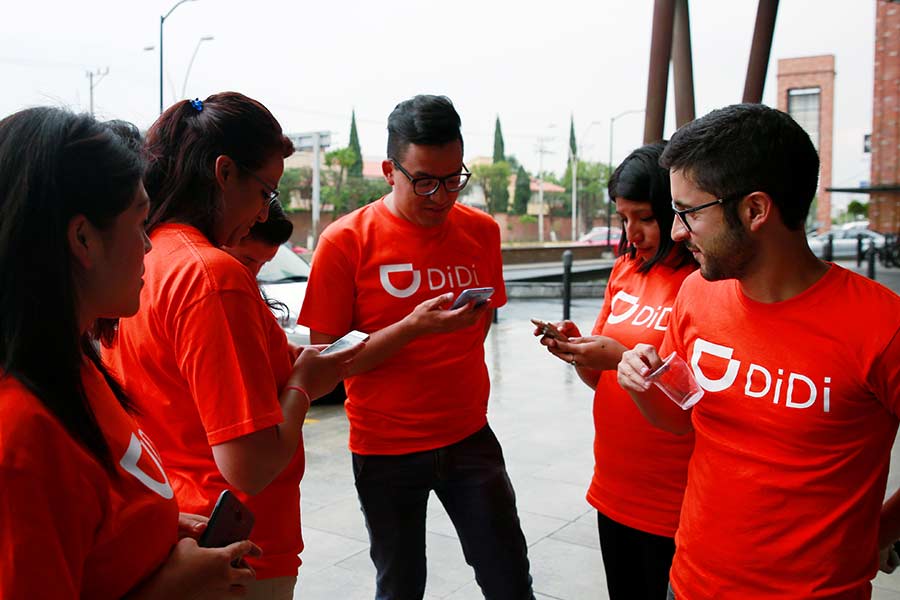 The logo of Chinese ride-sharing firm Didi Chuxing is seen on the T-shirts of employees as they look at the company's app, outside the new drivers center in Toluca, Mexico, on April 23, 2018. (Photo: China Daily)

China will continue to promote a predictable and improved environment for companies eyeing overseas expansion, and assist them in risk prevention, the Ministry of Commerce said on Tuesday.

Han Yong, deputy director-general of the ministry's Department of Outward Investment and Economic Cooperation, said the ministry would make continued efforts to innovate the way of outbound investment, and provide enterprises with more timely, targeted and authoritative public service products this year.

The move aims to help Chinese companies to better participate in international competition, Han said at a news briefing.

Han said Chinese companies are facing new opportunities, as well as risks and challenges, as the external environment has become increasingly complex. "In general, opportunities will outweigh challenges," he added.

To facilitate Chinese companies' overseas expansion, the ministry released on Tuesday a series of measures that keep track of foreign economies' laws and regulations on investment,

According to the 2018 Report on Development of China's Outward Investment, the country's outbound direct investment maintained stable development, but is facing certain global challenges.

The report predicted that China's investment in economies involved in Belt and Road Initiative will continue fast-paced growth, while their cooperation will be increasingly diversified. ASEAN countries have great investment potential in the fields of construction, engineering contracting and manufacturing.

In addition to traditional fields like power, transportation, petroleum and petrochemicals, more investment is expected to flow into sectors such as leasing, business services, finance and information technology, the report said.

Investment risks in countries and regions participating in the Belt and Road Initiative cannot be ignored, which span from credit risks and legal risks to national security reviews, the report said. It urged companies to conduct thorough investigations before investing.

No new projects were reported in the property, sports and entertainment industries last year, she added.

The report noted that the United States and Canada have adopted stricter investment restrictions, which lifted the investment risk in North America. Chinese companies should make preparations to avoid risks, the report said.