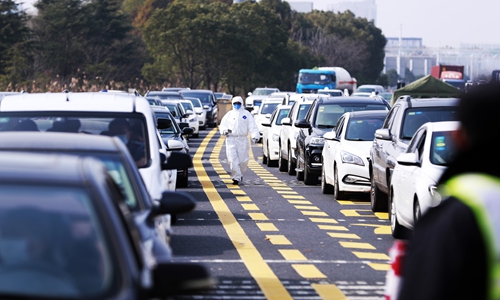 The US is receiving impacts from "misleading information" on COVID-19, and Chinese experts reminded on Sunday that although some US politicians had spread rumors to smear or insult China, the virus is a challenge to all of humanity, so China won't use the rumors to get revenge or mock such comments and speculations from US media and politicians.
From the beginning of February, some Western media outlets including BBC, Foreign Policy, and Newsweek reported that Russia is spreading "conspiracy theories" on the internet and in Russian media. Some US officials and politicians also accused Russia without evidence, while the Russian Foreign Ministry responded that this is a deliberately false story.
US' allegations about Russia's indulging in a misinformation campaign concerning the novel coronavirus origin are deliberately fake, Russian Foreign Ministry Spokeswoman Maria Zakharova told TASS on Saturday.
"It is a deliberate fake," she said, commenting on media reports that the US State Department thinks that Russia is behind proliferation of misinformation about the coronavirus outbreak.
Japanese media TV Asahi also reported that some patients in the US killed by the flu might have been actually killed by the COVID-19. This has added more concerns and panic about the virus' origin, which was stated as actually originating in the US rather than China, observers noted.
But the US Centers for Disease Control (CDC) confirmed to the Global Times that so far there is no evidence to support the statement of TV Asahi and that many of the flu death cases in the US were actually caused by the novel coronavirus.
The CDC also noted that there are 14 confirmed cases of COVID-19 infections in the US and an additional 21 confirmed cases among people who have been repatriated from Wuhan, China and the Diamond Princess Cruise ship in Japan.
Before blaming Russia of spreading "misleading information" about conspiracy theories against the US, some US politicians including Republican Senator Tom Cotton and some US-based media like the Washington Times have made baseless claims and spread misleading rumors to suggest that the virus is from China's biological warfare program.
Such claims have been rebuked  not only by Chinese Ambassador to the US Cui Tiankai, Chinese media outlets and the Chinese public, but also by some Western mainstream outlets with basic journalist morality.
Shen Yi, director of the Research Center for Cyberspace Governance in Fudan University, told the Global Times that "the virus is a challenge for all kinds of people so no one can really escape and be isolated to mock or insult others. Chinese people are very familiar with the feeling of baseless accusations from Western countries, especially US-made rumors and conspiracy theories against China, but we won't use misbehaviors to retaliate against misbehaviors."
Any conspiracy theory about the epidemic that could spread panic and interrupt virus prevention and control should be opposed, whether it was made to against the US or China, Shen noted.